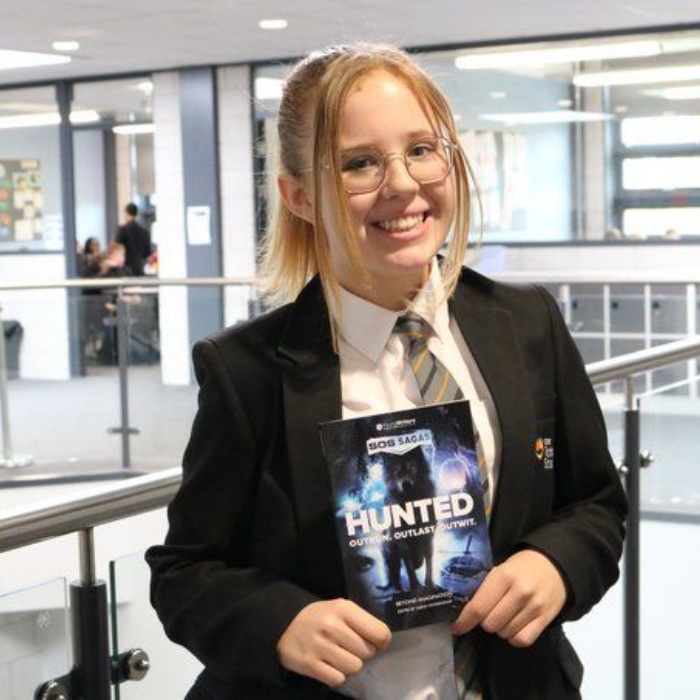 Well done to Year 9 student Olivia Whitty from Corby Technical School whose competition entry made her a published author after her short story was included in a book “Hunted”.

Olivia found out about the competition, run by Young Writers, in her English lesson and, as she loves horror films, she drew on those for inspiration for the story which had to be just 100 words long!

Olivia said: ‘I got my inspiration from films like Birdbox and The Quiet Place, where you either can’t see, or can’t speak as you will be hunted down by a monster. My story was based on the concept you can’t smell a certain scent or a monster will get you. My character thinks he is the only one left on earth. He has been on his own since his friend died and he has got to kill the monsters. He was hiding in a swamp to hide and disguise his scent but in the end he just ran.’

‘It is quite a lot of detail and emotion to get into just 100 words. I gave myself a few days and brainstormed ideas, trying lots of sentences and mixing things up. When I heard my entry was one of those chosen for the book I was really happy and proud. If I became an author I would love to be like Stephen King or JK Rowling!  When I found out I was going to be in the book I started on another story and I have done a few chapters so far.’