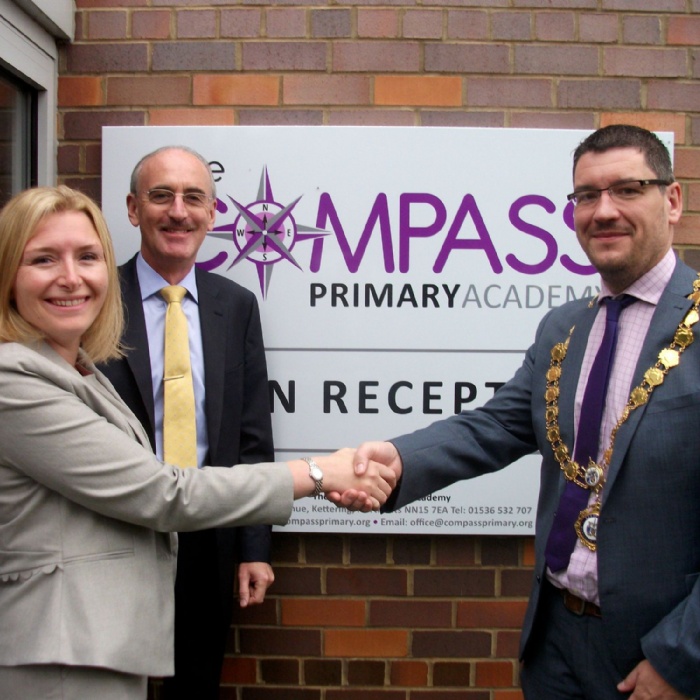 The Mayor of Kettering officially opened Compass Primary Academy, marking the start of its identity as a separate school with a new governing body, name, logo and uniform. Mayor, Cllr Scott Edwards gave a short welcome and performed a ribbon-cutting ceremony in front of a large crowd of parents and students, alongside Principal Jo Fallowell and interim Chair of Governors Phil Harris-Bridge.

He said afterwards: ‘This is the first school that I have opened. The Principal has got great plans for Compass Primary Academy and it is fantastic to see such an inspirational leader. This school is moving with the times and is absolutely fantastic. It was fresh, inviting and you can see a lot of work and dedication has been put into it.’

Phil Harris Bridge said: ‘Today is a major milestone. It is yet another break with the past and it gives us the opportunity to create a new aspiration for our students. This is now its own school with its own management and leadership team, its own board of governors and we are going places. It is surprising how long it takes to set up a school with its own policies, procedures and personality.’

Executive Principal John Henrys said: ‘This is an exciting, fresh start for the Academy with clear vision and values coming through and exciting plans for its next phase of development. A lot of hard work has gone into setting this up and Jo has got a very clear vision for the future and knows exactly what she wants this school to become.’

Mrs Fallowell welcomed students saying: ‘A huge thank you to all of the staff and admin team who have been very busy this summer getting the Compass Primary Academy ready for its opening. It is an exciting time, a new beginning when we will reflect the Brooke Weston Trust values of respect, resilience, co-operation, responsibility and aspiration. Thanks to the Mayor for performing our official opening ceremony, it was an exciting start to the new term!’