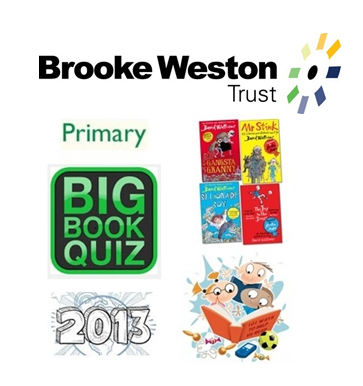 This initial quiz will be for year 5 pupils only who will be selected by the four invited Academies who this year are Kettering Science, Peckover, Gretton and Beanfield.

Each Academy has now received a secret package containing six copies of the same title by a well know children’s author. In order to ensure fairness in the competition the books selected are of similar genre and ability, none of the Academies will have had prior knowledge as to which book they have been allocated.

On receiving their package, each Academy will read and enjoy their selected text, complete activities to learn it and discuss the story and its characters.  Each Academy will select a team of 4 pupils who will represent their primary in the Big Book Quiz.

The quiz will comprise of two rounds in the style of ‘Mastermind’, followed by an 'on the buzzer' third round of general knowledge questions about literature, books and libraries in general. The winning team will take home with them the Big Book Quiz Trophy to hold for one year.

It is hoped that the Big Book Quiz will strengthen relationships between the Academies involved and lead to other shared literacy events.  For the pupils taking part, the excitement of initially opening the surprise package and then sharing the books as a class will nurture reading for pleasure and encourage pupils to continue to read books by the chosen author.  The quiz itself will encourage competitiveness but promote the values of working as a team.