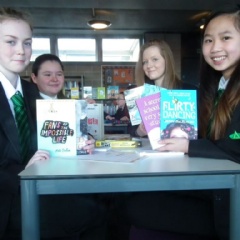 More than 6,000 people from across the UK and Ireland took part in the Bumper Book Quiz World Record on February 22 and smashed the previous record of 2,679 people taking part in a book quiz at the same time.

Among the participants were nearly 50 students from Corby Business Academy who were thrilled when Guinness World Record experts declared it was a new World Record yesterday on World Book Day.

CBA Librarian Amy McKay said: “It’s fantastic that the students are able to say they are World Record breakers.

“We were so pleased to have been involved in an event that schools around the country were taking part in.

“The quiz itself was very tough and we were very impressed by our students’ knowledge.”

The quiz was divided into different age groups so readers of all ages could join in.

Each level included guest video appearances from a variety of authors, including Charlie Higson, Francesca Simon and Julian Clary.