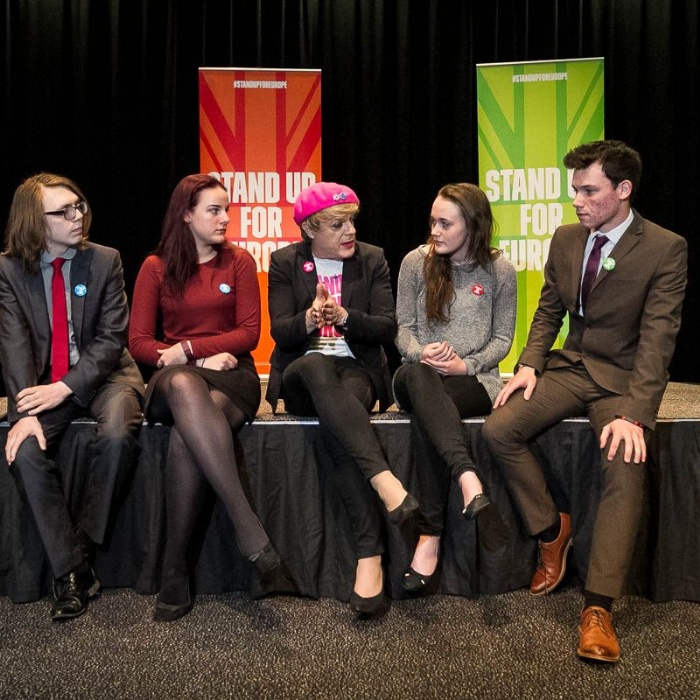 One of the big names in the EU Referendum Remain campaign came to Corby Business Academy yesterday (16 June) for the first of their presentations ahead of the vote. Comedian, actor and writer Eddie Izzard gave his Stand Up For Europe campaign presentation to about 100 Year 13 students and staff from schools across the Brooke Weston Trust.

Mr Izzard spoke to the students about his passion for continuing the UK's connection to the EU and answered questions from the audience on a variety of issues, including the economy, immigration and terrorism.

He said: 'Our economy will be stronger if we remain and that will help our young people who want jobs. If we pull out we will go into recession according to the Bank of England, the IMF and the OECD. None of the experts are on Brexit’s side.

'Barack Obama has said if we leave we will go to the back of the queue in trade talks and Hillary Clinton backs him up.

'Being in the EU gives us security and protection against crime. It’s logical that if you have 28 countries they should all work together. We shouldn’t pull out and try to speak to each of the other countries individually.

'This union was set up after the Second World War to stop wars happening. It was designed to lock peace in.

'I’m trying to put forward a positive world view where everyone has a fair chance and pulling out of the EU is not pulling in that direction.

'We have to make the EU better but we have to be inside it to make it better.

Speaking after the event, he added: 'It’s great to see the interest and enthusiasm from the students in Corby about politics and the referendum. We know the overwhelming majority of young people want to stay in Europe because of the opportunities it presents to work, to study and to travel. But if they don't vote, then those opportunities could be taken away without them getting to have their say. This could be the biggest decision of their lives and I want to encourage them to have their say on June 23rd.'

CBA Associate Principal Janet Duggan said: 'Whilst the Brooke Weston Trust does not align itself with any political viewpoint we are about learning and know that any choices or decisions we take must be informed ones. Therefore we welcome visitors to our school to help us to make the right choices for us as individuals.

'We welcomed Eddie Izzard yesterday and will be welcoming Vote Leave campaigner Helen Harrison next Wednesday.'

During his Stand Up for Europe campaign tour Mr Izzard has pledged to visit 31 cities in 31 days across England, Scotland, Wales and Northern Ireland.