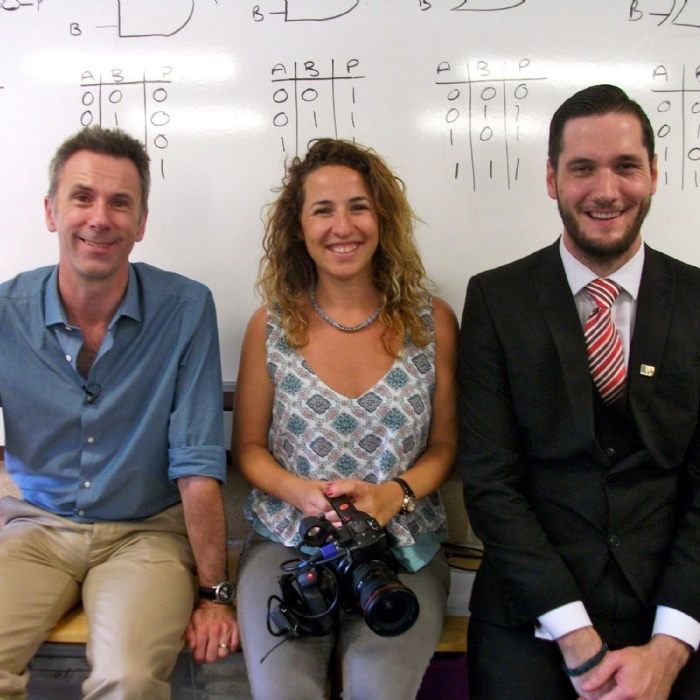 A film crew from BBC News’s Click filmed at Brooke Weston for a ‘back-to-school’ educational feature that will be broadcast this Saturday. Presenter Spencer Kelly and director Talia Franco interviewed our Year 10 students who have used Minecraft in their technology lessons to bring abstract concepts, such as logic gates in programming, to life. IT teacher Ray Chambers, who has been invited by Microsoft to become an Innovative Expert Educator, was also interviewed about technology in the classroom.

Spencer said: ‘We chose this school because Microsoft suggested that you had been using the Minecraft engine for a while. The whole piece is to show how Minecraft is being used in schools to accelerate learning, both in IT and cross curricular, so it has got applications not only in technology but also can be used across the breadth of lessons. The whole programme has a ‘back-to-school’ theme with several pieces on education. This is just one possible way of telling the educational story of Minecraft. The two students that we interviewed, Jacob and Dylan from Year 10 were very good.’

David Bell from Microsoft said: ‘Click want to understand how children interact with technology and how Minecraft can help with their learning. As this show is broadcast on BBC World there is potentially a global audience.’

Mr Chambers said: ‘The students are enjoying the buzz of having a TV crew in the lesson. Microsoft are releasing a new version of Minecraft for schools and it is really good for education. Imagine that you have an empty sandbox and you can do whatever you want with the sand. Minecraft is pretty much that, a simulated world made of pixels so students build the blocks. Today we are teaching them about logic gates in programming. Using Minecraft they can visualise the concepts so when they turn the switches on they see what the outcome is. This technology has cross curricular applications. For instance instead of asking students to produce a Powerpoint they can create a whole world explaining the concept you have just taught them so it makes the theory a bit more engaging. It is as easy as Lego and helps students unlock the creative parts of their brain.’

The programme will be broadcast on the BBC News channel at 1.30 this Saturday.