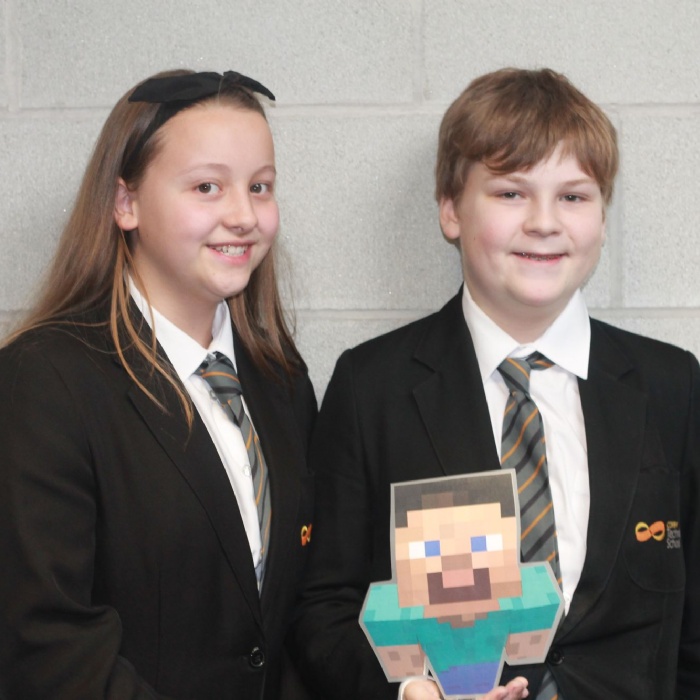 Two Year 9 students from Corby Technical School have built an accurate Minecraft model of the school building. Nathaniel Tew and Courtney Daniels used the program, which allows users to build using 3D blocks, to create a digital representation of the school, gathering data from real life research and  photographs.

It took them two weeks to complete and they spent a total of 20 hours on the project. They then created a YouTube video of their work which has currently received nearly 100 views.

Nathaniel, who has previously completed many other Minecraft projects, started the build alone, but after showing the idea to his friend, Courtney, she wanted to get involved as well.

He said ‘I took the role of the architect and Courtney did lots of design work including the interior. I have done lots of big buildings before however this is the most accurate because I am at the school daily and can check for details.'

Courtney said ‘I built the outside walls, the hill, the upstairs computer rooms and lights and I think it was these small jobs that make the bigger difference.’

Nathaniel said ‘We are both very pleased with the result. It is structurally correct; the wings were challenging to make due to the angles which are restricted due to the Minecraft tools available. I have always had an interest in computers. It’s my favourite subject and I have my own YouTube channel with over 800 subscribers.’

Courtney said ‘I hope that girls also start to realise that the game is not just for boys and they can build things too.’

They created the YouTube video of the school building using the program ‘Movie Maker’.

Computer teacher Mr Arron Gourlay said ‘The great thing is they have used a tool, which is considered to be a toy, to create something technically and architecturally correct. It is impressive how they have used the platform to create this vision. Everyone from school who has watched it cannot find fault with it. I hope it inspires others to start using this platform for homework and the presentation of projects.’

For their next project Nathaniel and Courtney hope to build ‘Planet Bounce’ a trampoline park in Northampton.

Please click the link to view the video of the Minecraft building: