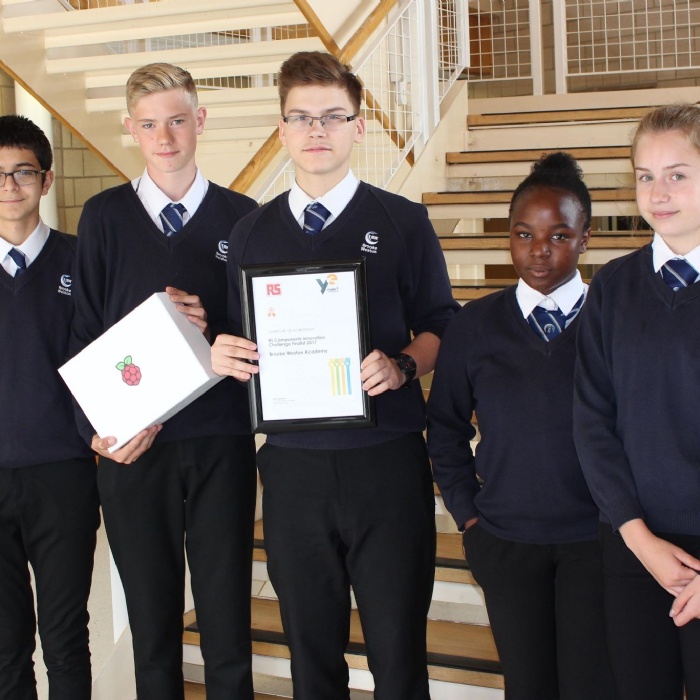 Year 9 Students  from Brooke Weston entered an innovation challenge run by local global distribution company RS Components to design a new layout for their Innovation Truck and succeeded in beating 25 schools and winning five new computers worth over £500 for the school.

RS Components launched their competition in February and invited 25 schools across the East Midlands to take part. Antonio Yanakiev, Ropa Nyaruwa, Jorja Fox, Jack Norman, David Castro and Szymon Damonwski made up the Brooke Weston team and worked together to solve various problems throughout the day, concluding with the Innovative Truck challenge. They succeeded in making it through to the final stage of presentations held at Loughborough University together with five other schools.

The presentations were held in front of a ‘Dragons Den’ style panel of three judges, where students presented their ideas and had to answer quick fire questions. Computer Science teacher Mr Raymond Chambers said ‘I am so proud of how well the students have done in this competition. I was worried about the presentation stage as a few of the students can be quite introverted but they all really came into their own and answered some very difficult questions from the judges about funding their project and how they would sustain it. They pulled together and really worked well as a team.

‘The judges said we won because we had a fantastic presentation, a proper business plan and had thought about the target audience and who we would promote the truck to. One idea was to create a second floor on the truck dedicated to getting more girls interested in engineering and computer programming and to host a range of different workshops on the truck.

'I think their ideas did so well because the team are in touch with what is high priority at the moment. We know in the UK there aren’t as many girls in computer science and engineering and they wanted to think of an idea which would focus on that. They also thought about how they could promote the truck to a larger younger audience by getting YouTube stars to talk about the truck on their blogs.’

Year 9 student Jorja Fox said ‘The presentation was really nerve wracking. I didn’t think we would win but the judges said that we had considered everything within our proposal and ticked all the right boxes. I really enjoyed working on the project and hope that we can enter similar ones in the future as it really helped to build my team work and confidence.’