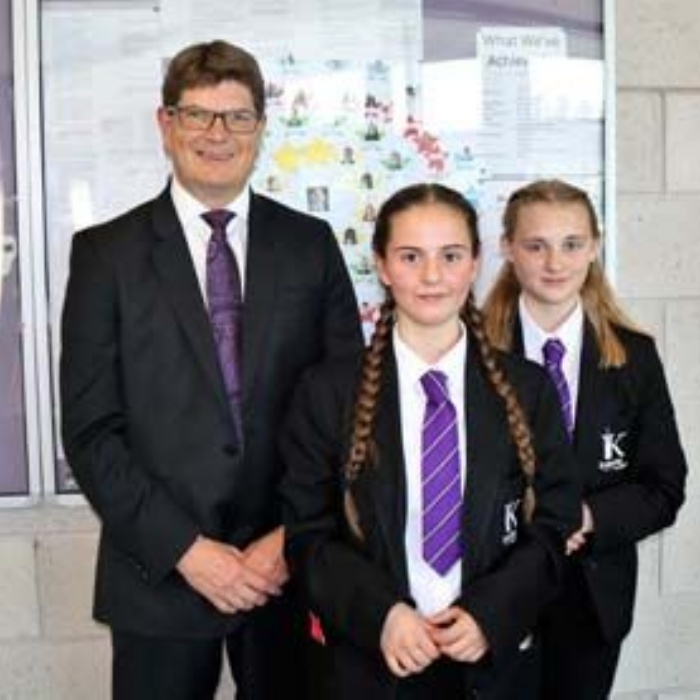 Thanks to the staff and students of Kettering Science Academy who hosted the latest leg of the ‘CEO on tour’ event. Dr Andrew Campbell spoke to a range of staff and students about the inspirational and extra-curricular activities that take place at the Academy.

He started off by seeing a new initiative the PE department have introduced to boost girls’ sporting achievements by implementing a new awards scheme. Then he spoke with students Louise Tillsley Isabel Buckle, Ben Cox and Vijesh Patel about the sports offer at the school and the recent success in the boys’ U-15 cricket tournament in which KSA and Brooke Weston vied for top place. 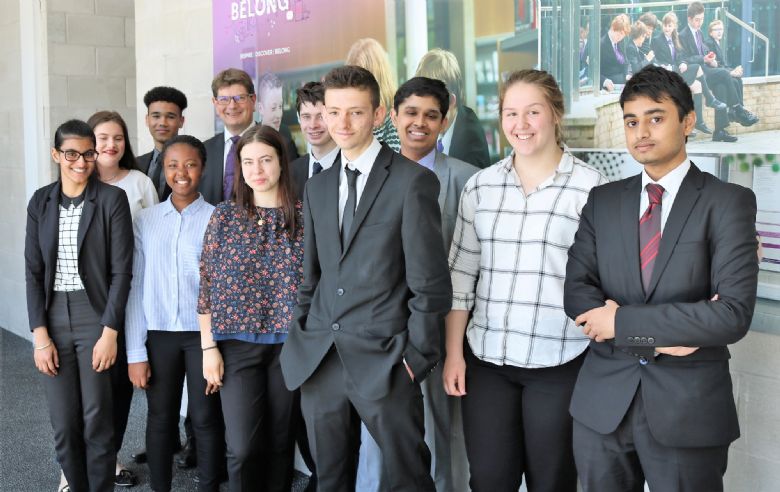 Dr Campbell then met with Sixth Formers to talk about the Sixth Form provision, their aspirations and future career plans, which included medicine, law and even animal conservation. It was a wide-ranging discussion in which the students aired their opinions on A Level study.

A visit to the Library was next on the itinerary where Librarian Heidi Economou talked about the importance of literacy, instilling a reading culture and the many cross-curricular links that exist between the library and the individual departments.  It is a well-used resource with around 8000 resources, computers and a dedicated area for quiet Sixth Form study and it acts as a hub for many of the Academy’s fund raising and extra-curricular activities. 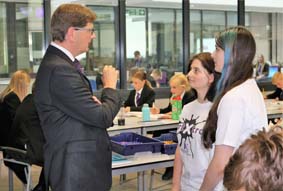 Dr Campbell’s next stop was the Art Department where he met Mr Bean and students Monika Kwak and Nereyce Rawcliffe, who are current Year 10 students but who started an extra-curricular art club in Year 9. The activity has proved so popular that they are showcasing their work in an art exhibition on 20 July where artworks in a range of different media will be on display. Dr Campbell also saw the vibrant artwork being created and displayed around the classroom, created by students from Year 7 up to Sixth Form level.

Dr Campbell then went into a Year 7 drama class that were making their own sound effects as part of a project on radio. They had studied Foley artists, who make sound effects for films out of everyday objects, and names after its originator, Jack Donovan Foley. 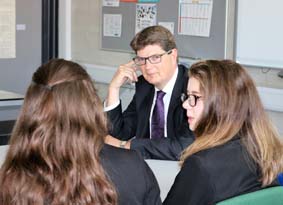 s Award bronze expedition and also planning for a four week long expedition to Kenya next year. They are led by teacher Rachel Davies, who co-ordinates the scheme at KSA.

Thanks to Year 8 students Kallie Bauckham and Charlotte Jones who accompanied Dr Campbell around the Academy, showing him the Student Senate display board which is how student opinion is gauged and acted upon.

Afterwards Dr Campbell said: ‘Thanks to everyone who made my visit so informative. It gives me an opportunity to talk to students about their experiences at school, what we are doing well and what can be improved upon. It is also a chance for staff to talk about further strategies we could implement in order to give our students the best life chances and opportunities, both in lessons and in extra-curricular activities.’

Click here to see a gallery of photographs from the visit.