School of Rock Rules at TCA!

Students put on a barnstorming performance of School of Rock that rocked Thomas Clarkson Academy to its rafters! The cast put on a stellar show with fantastic songs, great dance routines and stand-out performances from its lead characters.

The show, which recounts the story of Dewey Finn, a music wannabe, who takes up a role as substitute teacher at an elite school, transforming students into an amazing rock band against all the odds, was fast-paced, dynamic and a great crowd pleaser.

Thomas Clarkson Academy successfully applied to stage the show, written by Andrew Lloyd Webber, and offered to schools royalty free for one year only.

The cast, who have been rehearsing since Christmas, have spent hours honing the production and the result was an amazingly polished performance with an accomplished cast who obviously enjoyed every minute of the show, as much as the audience.

Sixth Former Ewan McConnachie shone in the lead role of Dewey and was onstage for virtually the whole time, delivering top vocals and great acting. Bethany Ellerby, a very accomplished actress, took on the role of strict Miss Mullins, the school Principal, who, along the way, revisited her love of rock. Gvidas Grikietis ably played the part of hen-pecked Ned Schneebly who, despite being a teacher, was a true Rock God at heart while Kirsty Lee-Newman played his battle-axe partner Patty Di Marco to a tee.

Special mention should be made of drama teacher, Mrs Julie Wilcox who also played a parent, as well as directing the play and Mr Laurence Watson, the musical director, who also voiced Jeff, the compere from 'Battle of the Bands', Mrs Wilcox and Mr Watson were both instrumental (!) in bringing the play to life, aided by the talents of the very loud and very rocky live band.

Thank you to all the helpers backstage and pre and post-performance who provided the sets, props, costumes, catering, strategic planning and everything else to make sure the show went with a bang.

Finally, both performances of School of Rock are dedicated to the memory of one of our much loved, respected and missed colleagues, Mrs Nicki Cobbin, who was passionate about improving the lives of countless children and young people.  All proceeds from the raffles on both nights will be donated to Cancer Research in her name. 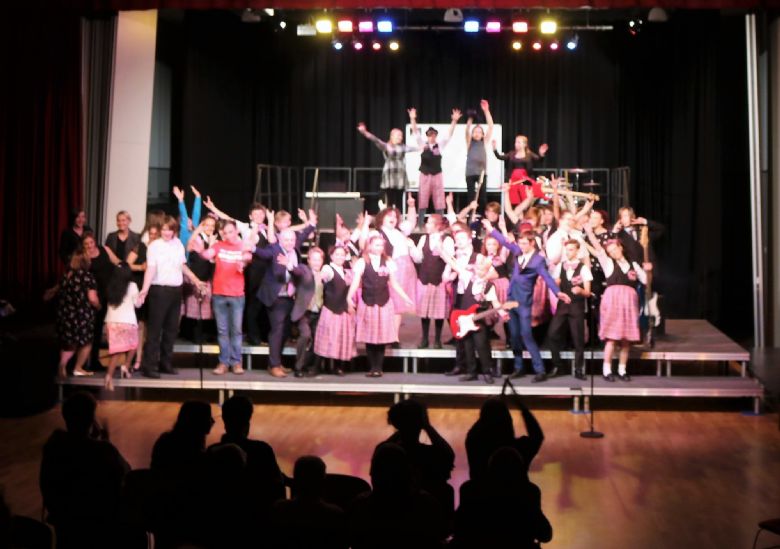