Groups of students who took part in the Youth and Philanthropy Initiative (YPI) battled it out for the chance to win £3,000 for a charity of their choice. 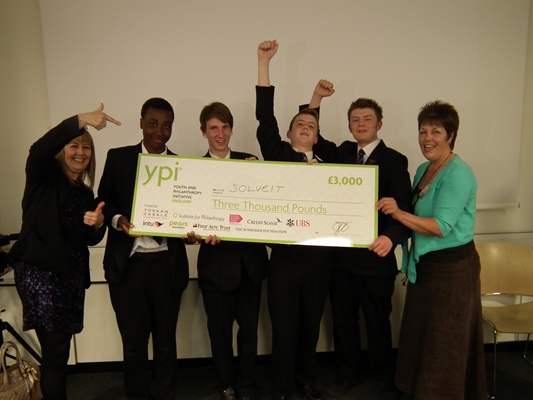 Six groups were tasked with researching their nominated charity and meeting staff and those they help. Each group then delivered a persuasive eight-minute presentation to an audience of parents, charity representatives and the judging panel, which was made up of older students and a member of staff.

At the end of the evening, two Year 11 judges unveiled a giant cheque made out to the winning group’s charity, Solve It, which raises awareness of the dangers of substance abuse in children and young people. The winning group was made up of Jordan Graver, Malcolm Zimuto, Josh Dawson and Jack Maloy. The charity’s representatives praised the students for their efforts, particularly for attending a primary school presentation of their own accord.

Jordan said: “We remember Solve It coming into our primary schools and they haven’t been to KSA so we thought it would be good to raise awareness of the issue of substance abuse.

“We tried to make our presentation unique and add in a bit of humour, so it was a bit different.

“We’re going to continue working with Solve It – they have invited us to help with an event at St Andrew’s Primary School later this month.”

Malcolm added: “Our generation has got used to receiving things so we need to learn how to give back. That’s the experience YPI gave us.”

Other charities students chose to support were the air ambulance, Women’s Aid, Aquarius Action, Cranford Riding Association and Northamptonshire Young Carers. The audience heard how one group made a two-hour bus journey to Northamptonshire to learn more about their nominated charity.