A bus shelter has been built at the public bus stop outside Corby Business Academy after Sixth Form students spent a year campaigning for it. 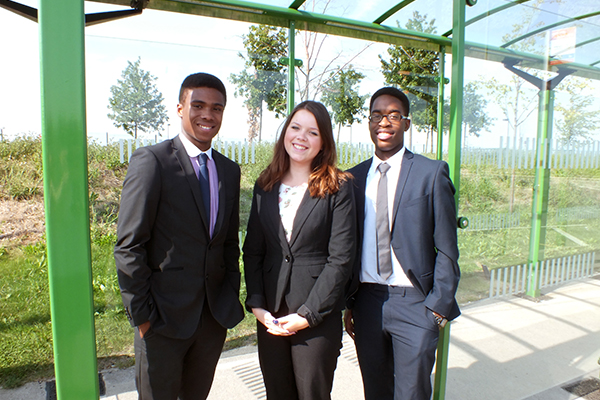 Last year’s Head Boy and Girl, David Graham and Ellie Mae Moore, and students Morium Akter and Andile Chiwuta, who were all part of the school’s Senate, met with local councillors, council officials and bus companies last year to put forward their case for the shelter.

All their hard work paid off when the shelter was built ready for the start of the new school year.

The students appeared live on Helen Blaby's lunchtime show on BBC Radio Northampton on Wednesday to talk about their campaign, which is also being featured in this week's edition of the Corby Telegraph.

Former Head Girl Ellie said: “The shelter is fantastic and we are all proud that it is here after all of our efforts.

“We learned so much about the democratic process through this experience, and we also learned that there was much more involved in the creation of a bus shelter than we realised.”

The bus shelter was a collaborative project between Northamptonshire County Council, the Corby Business Academy Senate and Macemain Amstad. Funds were used from the Senate’s annual budget and money was pledged by local councillors after they were contacted by the students. The county council matched the amount that the students managed to raise so that the project could go ahead.

Rob McGreal, sales director at Macemain Amstad, went the extra mile to support the students with the project, meeting with them regularly to discuss the materials and designs available, and even bringing in parts of shelters for them to test the difficulty of writing graffiti on the different materials.

Head of Sixth Form, Kim Isaksen, said: “It has been wonderful watching this idea originate from our student Senate and evolve over the months. The outcome is a shelter that students can be proud of and that will benefit many for years to come. We’d like to say a huge thank you to all of those who supported the students.

“The students have learned a huge amount about the legalities around obtaining a shelter and have been extremely persistent and patient throughout this process.

“They have developed communication skills and demonstrated maturity when liaising with people at a senior level.”