Author Malcolm Rose demonstrated a £10,000 bionic hand during his visit to Brooke Weston when he led workshops, assemblies and a book signing session. 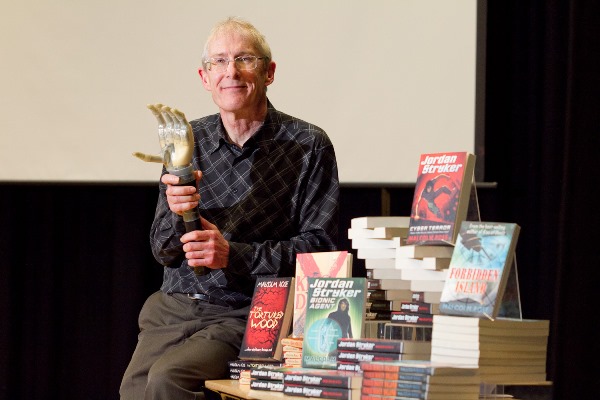 Malcolm, who specialises in thriller and crime stories, described his job as 'professional day-dreaming'.

A former chemistry lecturer with the Open University, he spoke to students about the potential forensic clues anyone may leave at a crime scene, including skin and hair particles, saliva and mucus samples. He also spoke at both assemblies and, in a final session, delivered a talk to the entire Year 7 and 8 students about one of the heroes of his book, Jordan Stryker; a boy who died in an explosion, but was resuscitated and given a bionic arm.

Mr Rose illustrated his talk with the artificial hand that was built by Touch Bionics. He spoke about the latest medical technologies and how they might develop. Afterwards he conducted a book signing session.

He said: 'I started writing when I was 16 when I was forced to do it by an English teacher. I suddenly realised it was great fun and since then I have enjoyed sitting down and writing. When I was at university instead of going out and kicking a ball around I kicked words around. My wife one day said, some of these are quite good, why don't you get them published, so I joined a writers' club to find out how to submit a manuscript to a publisher.

Now Malcolm has published over 30 books and short stories and it typically takes between three and six months to write a novel: 'I will only take on a story that I am utterly convinced will work. I don't have a plan as it is curiosity that drives me to get to the end. I find it easier to write to the end of a book because I am not 100 per cent sure what is going to happen and I want to find out. I find out whodunit about three quarters of the way through. I have got three or four suspects and they all could have done it.'

Malcolm was rejected by only five publishers before he got a book deal. 'My first novel was published in 1985 when I was still a chemist. I wrote almost entirely after midnight. I am very pleased I had a career before I became a full time writer in 1996 because it gives me something to write about. That is why science keeps cropping up in my stories. At the start of a novel, I have a gripping opening scene, at least one major character and probably usually two, and I have the theme of the book, something like chemical warfare. I then write my characters into situations and see what they do. For me that is a much more natural flow than planning it.

'When they come alive in the writer's mind they might do things that you hadn't planned for them. Everyone assumes that when you get to the end of a long project, like writing a novel, that you are really happy. I am fairly desperately sad that all these people that I have lived with for three to six months have just left me, so I start the next one immediately because otherwise I haven't got this fictional family around me any more!'