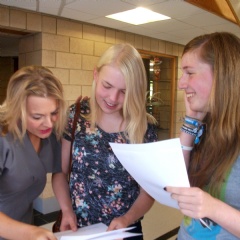 An impressive 84% of students achieved at least five A* to C grade GCSEs including English and mathematics; a significant increase on last year’s figure.

The core subjects of English, maths, science and modern foreign languages, over 90% of students attained an A* to C grade.  In English and mathematics, more than 80% of students made three or more levels of progress; a figure that is significantly above the national average.

There were also outstanding individual performances;

Figures indicate the percentage of students achieving 5 A* to C grades, including English and Mathematics, has risen to 61% - a rise of 23% in the last two years.

The percentage of students achieving the highest grades has also increased with the number achieving at least 1 A* to A grades increasing to 57%. Stand out subjects include English, Physics, Chemistry, BTEC and GCSE Business, Sport and Music.

The number of students who achieved A* to C in the EBacc subjects has also increased with English, Mathematics, Science, Languages and Humanities all posting improved results.

Kettering Science Academy’s GCSE results confirm Ofsted’s view from the last academic year that the Academy is on the right track.

There has been significant improvement in individual subject GCSE performance across the curriculum with 11% more students gaining 5 good GCSEs including English and maths since 2012.

The number of As and A*s grades awarded at GCSE has almost doubled since last year and we  can also be pleased with the results in the triple science GCSE qualifications.

Some of the top achievers picking up their results today included;

There have been some fantastic individual successes and the Academy has seen an improvement in results in Modern Foreign Languages, Science and Art.

1 student achieved 5 A* and A grades, whilst three others each gained 3 A* or A grades.

However, results at TCA overall were disappointing and changes to the weighting given to different subjects have meant less students than we hoped have achieved 5 or more A* to C grades this year.