Introducing BWA's new Head Boy and Girl and their Deputies 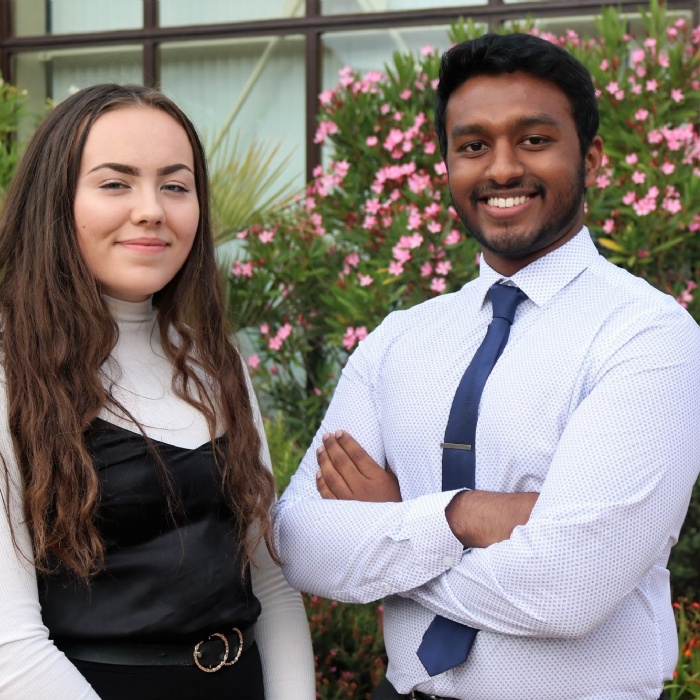 They, along with their deputies, Archie Hanlon and Maja Raczkowska will be ambassadors and role models, show visitors around and take part in events, such as the annual Prize Giving ceremony.

They were each selected after a rigorous interview process with Principal Pete Kirkbride and Nina Smith, Director of Sixth Form. They bring a range of academic and inter-personal skills which will stand them in good stead over the next academic year.

Head Boy Sharon Sajan is studying four A Levels and has ambitions to study medicine at university. He said: ‘Although I joined Brooke Weston Academy relatively recently at the start of Year 12, I wanted the role as I would like to contribute as much as possible in a new environment. I try to take every opportunity I am given.

‘Being Head Boy will give me the opportunity to practice leadership and public speaking. I have got good organisational and interpersonal skills and I try to develop my networking as well.

‘I have interests in photography and have played basketball. I have also worked at the Kumon Study Centre teaching advanced mathematics for about three years. The trick is to balance school life with this new extra role. It will be a challenge at first but I am pretty organised.’

Madysun Buchanan, who is studying three A Levels, hopes to be a forensic chemist. She said: ‘When I started in Year 7 there wasn’t a Head Girl role so when it was introduced it was something I really aspired to be. I didn’t have the easiest start in Year 7 and Brooke Weston Academy did a lot for me.

‘I wanted to be able to give something back and show that I was appreciative and even though situations might be hard you can get through. I am a bit nervous with public speaking so I think the role will help with that.

‘I consider myself a people person so if anyone has any issues I feel I can understand their situation. The challenge as Head Girl is always having to be on point and making sure that you are a role model for the younger students.’

Deputy Head Boy Archie Hanlon is studying three A Levels and hopes to study physics at university. He said: ‘I have been at Brooke Weston Academy since Year 7 and it has helped me both socially and academically. I want to contribute to the school. The role will help with confidence, public speaking, leadership and skills that are important to employers and universities so there is a lot to gain.

Deputy Head Girl Maja Raczkowska is studying three A Levels. She also completed a taster course at Oxford University earlier this year and plans to eventually go into business management and marketing.

She said: ‘The Uniq course at Oxford boosted my confidence. I wanted to apply for the role because I thought it would be a good opportunity and would allow me to give something back to the school. Ever since the Head Girl role was introduced I aspired to help out the younger students, give something back and put my ideas forward.

‘Brooke Weston Academy has helped me a lot. I have been here since Year 7 and it has shaped me to be who I am. This role will build on my confidence in public speaking and it will also be good experience for university. Archie and I will be helping the Head Boy and Head Girl with their duties so it will be a real team effort.’

Principal Pete Kirkbride said: ‘The Head Boy and Girl roles and their deputies play an important part in the life of the school. These students have shown that they have the necessary attitude, skills and attributes to represent Brooke Weston Academy, both to their peers, their younger students, visitors and the wider community. I wish them all the very best in their new and exciting roles.’