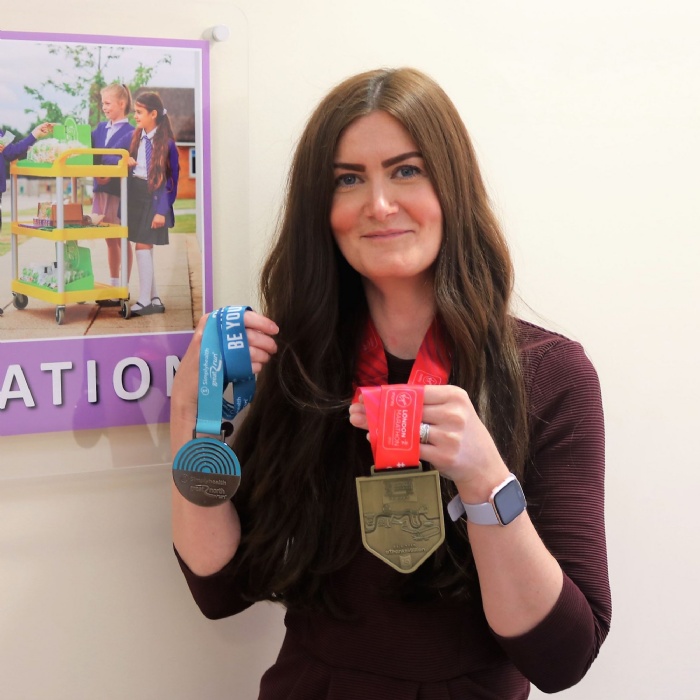 Well done to Nicole Andrews, Vice Principal at Compass Primary Academy, who has gone from a non-runner to completing two iconic races in less than a year.

She said: ‘My husband had applied for the London Marathon five years in a row without success but heard a rumour that on the sixth time you automatically get a place. I applied as a joke to surprise him as I thought we could train together. I got in and he didn’t! During the last week in November I went out for my first mile and thought “I can’t do this!” so to go from there to do the marathon was a huge achievement.

‘I joined Corby Marvels running group and they were phenomenal. Running just takes over your life. I would get up at 5am at the weekend to do a long run and by the time I got to April I was running 20 miles straight!’

‘On marathon day as soon as I got to the start line I thought, “oh my gosh, I am actually doing this …” It was a wonderful feeling! The crowd was encouraging and I remember sprinting down the home straight. I stopped before I got to the finish line, took a photo then walked across. There was an overwhelming feeling of emotion. When I saw my husband I was so elated and just buzzing. My sister, friends and colleagues have said I have inspired them to start running and they have signed up for the ballot for next year.’

Nicole finished the marathon in just over five hours and raised £1,500 for a charity that supports bereaved children. Her family, friends and the Trust primary schools all did fundraising towards her total. ‘Thanks to colleagues, Trust Primary Executive Principal Leyton Smith and all the other Trust schools plus friends and family that supported me. It’s the perfect charity and very close to my heart.’

‘It is still an amazing atmosphere and my sister who helped me train for the marathon did it with me. We made a pact we would do it together as we trained for the marathon together. It was lovely and when we got to the finish line there was a beautiful choir singing so I was really emotional. It was because it was the run I always wanted to do. I always watched it on the television and thought it was an amazing thing to be a part of.

‘I did the GNR in just over two hours to tick it off my list. I hadn’t trained as much but I knew mentally that I could get across the line.  Running does so much for your mental health and gives you the time and space to think through issues. I track all my runs and from November I have run just under 400 miles. You fall in love with it and it becomes addictive.

‘I have always been driven and I am thinking about climbing Snowdonia for my next challenge. I have always been a person who does something and then says “what next?” This year has taught me that that anything is possible if you put your mind to it!’