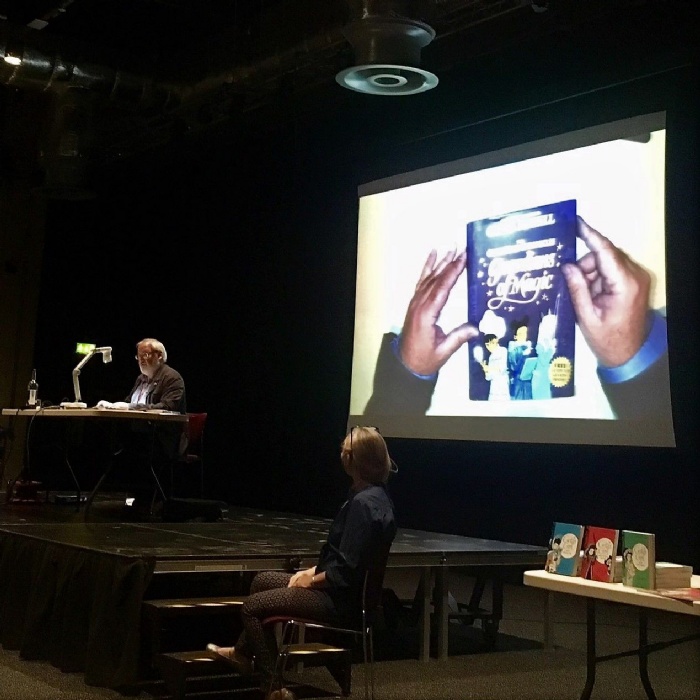 Students from across our Trust schools and beyond were thrilled to meet noted illustrator Chris Riddell when he visited Corby Business Academy to talk about his latest book.

Mr Riddell, who was Children’s Laureate, has also won the prestigious Greenaway Medal three times for his illustrations and is the political cartoonist for The Observer.

Corby Business Academy’s Librarian Amy McKay said: ‘Chris is one of the biggest author illustrators for young people in this country and he is very impressive so when we got the phone call to ask if we would like him to visit we nearly bit their hand off! Chris is promoting his new series, Cloud Horse Chronicles, the first of which is Guardians of Magic.’

Mr Riddell spoke to around 380 students, including all of Year 7 at CBA. Seven other schools were invited, including Trust schools Beanfield, Gretton, Corby Technical School, Kettering Science Academy and Thomas Clarkson Academy.

Ms McKay said: ‘There were lots of students there, including ones from CBA from other years and also Sixth Formers who have grown up reading Chris’s books who got very excited at the prospect of meeting him. He was mesmerising as he live illustrated as he talked. He used pencils and just drew pictures as he was talking. It was just incredible.

‘He chatted in general, talking about how he sketches. He spoke about his life as an illustrator, about the new book and talked about the creative process and how he works. He read a few poems out and all the time he was illustrating while talking. It was the first time he has been here and we would have him back in a heartbeat. He was so generous with his time, signed books for two hours and so many students got individual illustrations.’

Later that day Chris also promoted a new poetry anthology at Corby Cube, an event which attracted another huge audience. CBA student Elaine Kahwa, from Year 11, was one of three poets who were selected to read poetry out while Chris live-illustrated and she was even invited to read out one of her own compositions.

Amy said: ‘It was a great event and good to have something like that in the town. We are lucky at CBA as we have visits from excellent authors and illustrators. Chris’s visit to the Cube was such a fantastic opportunity for the community also for Elaine to take part in such a memorable event.’