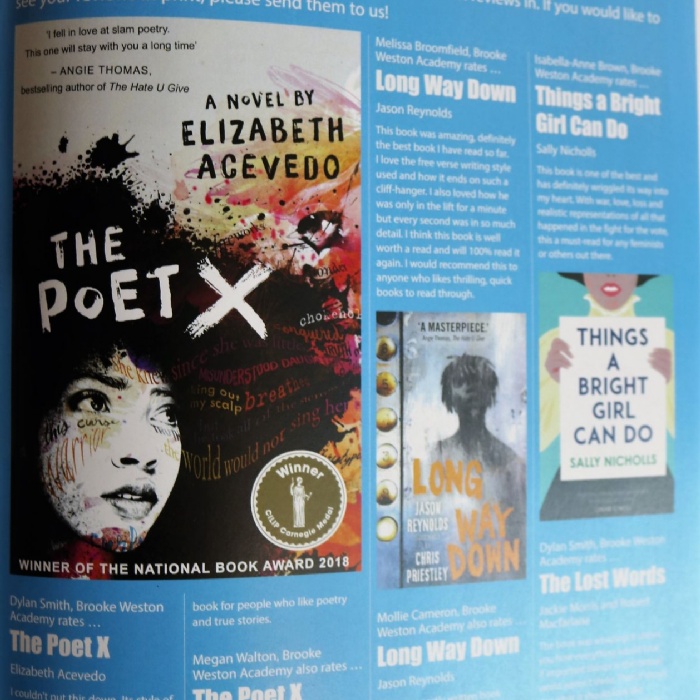 Well done to five students who have had their book reviews published in a nationwide fiction magazine, with the views of Brooke Weston Academy students taking up an entire page of Teen Titles!

Year 8 students Dylan Smith, Isabella Anne Brown and Melissa Broomfield, along with Mollie Cameron and Megan Walton from Year 9, all had their reviews published in the October issue. They had written them as part of the Carnegie/Greenaway shadowing process at Book Club. Librarian Wendy McCabe submitted all the Brooke Weston Academy entries to the magazine and six were published.

Dylan said: ‘I got two reviews in, for Poet X and The Lost Words. I have never really been into a book written in verse, this was my first one so it got me reading more. The Lost Words was in the Greenaway category and it really got me thinking about nature. The Poet X review was difficult to write because lots of people had written about it. The Lost Words was an easy one. This is the first time I have ever had anything published so I am really happy and shocked.’

Isabella-Anne said: ‘People from all over the country wrote entries and it is so exciting to see mine in this publication. I wrote about Things a Bright Girl Can Do. It was set in the early 20th century and I liked it because it was about feminism and standing up for your rights. It was a very personable book.’

Melissa said: ‘I wrote loads of reviews but the one that was published was on Long Way Down. After we had read a book in Book Club we would go straight onto the computer and write a review. I really didn’t expect this to be published as so many people wrote reviews.’

Mollie said: ‘I did reviews on both Poet X and The Long Way Down. The second one got published. I liked the free verse in the book and also the cliff-hangers, because you think about what happens next. It feels good to get my name in print!’

Megan said: ‘I wrote about Poet X. It was very relatable to modern day society and how young girls are treated. It also teaches you how to overcome problems. It is a very inspirational book.’