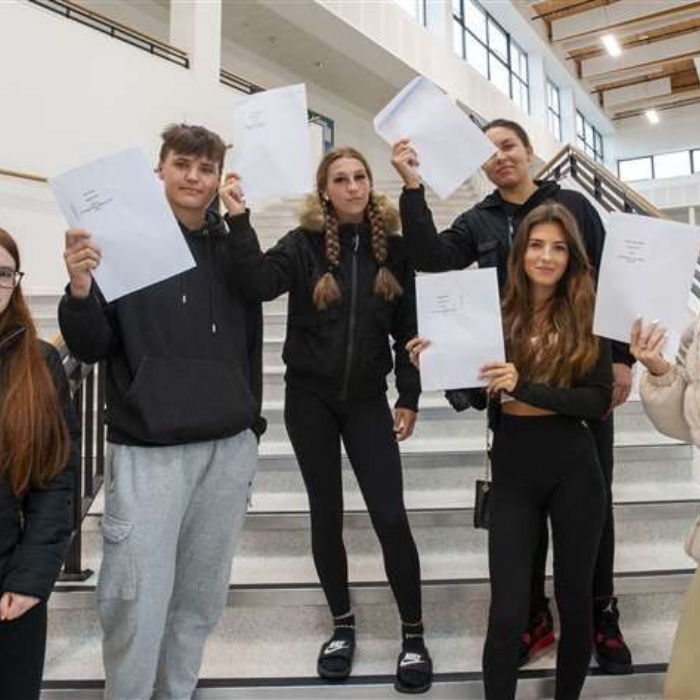 Staff and students across Brooke Weston Trust are celebrating an outstanding set of GCSE results. This year’s cohort were the first to sit formal examinations in the last two years and have exceeded expectations with many outstanding individual achievements.

Thomas Clarkson Academy revealed its best-ever set of GCSE results with standout performers including Jasleen Kaur who moved to the UK in Year 10. Jasleen had to learn English alongside her GCSE subjects and demonstrated phenomenal progress in her comprehension in an incredibly short space of time. Her grades included two 9s, four 8s, three 7s and a distinction.

Some of our other highly graded students were Sofia Reeves, with seven 9s and two 8s; Sophie Tjurina with six 9s, two 8s, two Distinction*s and a six. They were joined by Aukse Janusauskaite with three 9s, three 8s and three 7s; Gvido Malinouskis who achieved one 9, four 8s, one Distinction*, two 7s, one six and a Merit while Skaiste Tlembetovaite achieved one 9, four 8s, four 7s and a Merit.

There were also a number of students who overcame personal barriers to achieve great results with their exams.

Lacey Barrett missed school from the spring of Year 9 to the autumn of Year 11 due to health problems, but she showed absolute determination to achieve the grades she needed to move into the academy’s sixth form.

Scarlett Marr and Sophie O’Neill both had personal challenges but showed significant resilience and have both been accepted into the sixth form.

Staff and students at Corby Business Academy were delighted with their GCSE and vocational results. Individual successes included Lewis Gibbs with three 9s, four 8s and two 6s; Amalie Lines who attained three 9s, two 8s, three 7s and a Distinction* and Bethany Wishart who achieved grades 9 - 7 across all of her subjects. They were joined by Lucy Stone and Robert Hartley who also secured two 9s and five 8s within the grades they each achieved.

Brooke Weston Academy was incredibly proud of all 179 of their GCSE students for their hard work, determination and perseverance throughout this challenging year. The school’s top performing student was Marcus Ciobanu who achieved grade 9’s in all of his subjects. Marcus will be staying on at Brooke Weston Sixth Form to study Maths, Further Maths, Physics and Computer Science.

Also amongst the school’s top performers were Charlotte Fletcher, Ruby Gardiner, Mia Brown and Amelia Millier who all achieved grade 8’s and 9’s in every subject. Joining them were Zahra Kahn, Ruby Markham, Matthew Starkey and Yazmine Sharif who all achieved grades 7, 8 and 9 across all subjects. All of the above students are staying on at Brooke Weston to study for their A Levels.

After celebrating an excellent set of GCSE results, many students will be returning to Corby Technical School’s Sixth Form, some students have secured apprenticeships in finance, social media, and Engineering. Others have accepted places at various colleges to study Drama, Graphic Design, Law and Criminology, Engineering, and Game Design.

Angela Reynolds, Principal at Corby Technical School, said: “I am so proud of each of our students today who have achieved excellent results that are thoroughly deserved. The accomplishments seen today are a real tribute to the incredible work ethic and drive shown across the year group. Celebrations were absolutely in order which I was thrilled to be a part of this morning.

“Students have faced great obstacles over the last few years and have demonstrated resilience and perseverance throughout their studies despite the turbulence. It is always a pleasure to be part of our student’s journeys as we witness them moving on.”

Dr Andrew Campbell, Chief Executive Officer of Brooke Weston Trust said: “We are thrilled with the accomplishments of students and staff across the Trust this year. We are passionate and unrelenting in our desire to give our students the best start in life and the outstanding results are a true testament to the incredible efforts shown in our provisions.

“It has been a pleasure to witness the ambition and dedication shown by this year’s students. The sheer hard work and determination has been truly inspiring, and I have no doubt they will succeed in the next steps of their educational journeys.”