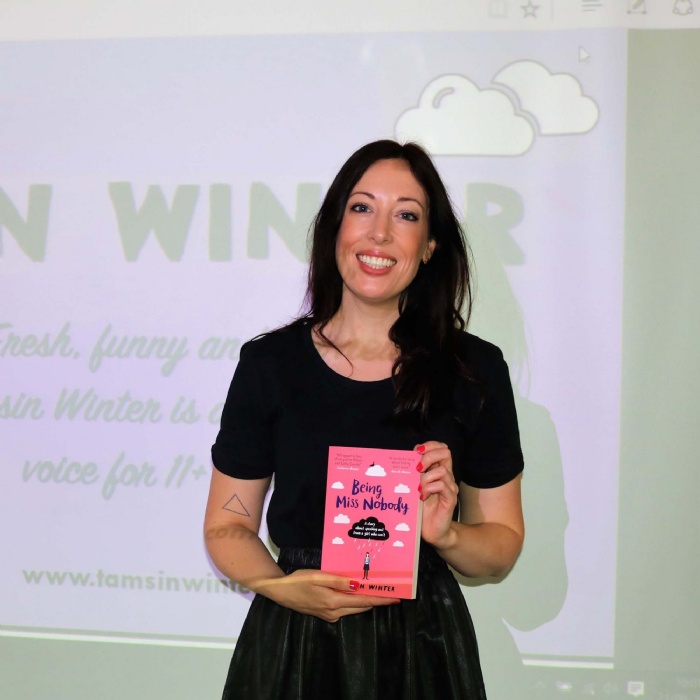 Former Brooke Weston teacher Tamsin Winter spoke to students about her first novel ‘Being Miss Nobody’ which deals with anxiety and mental health issues. Tamsin, who trained as a teacher at Brooke Weston and taught English here until leaving in 2005 always wanted to write and now she is doing author visits and working on her second novel.

She said: ‘I have been trying to come up with an idea for a novel for a long time. I was just daydreaming and a character came into my head. She was a girl who was completely alone, being ignored by everybody around her with all these words in her head that she couldn’t speak. That girl became my main character, Rosalind. It was a very strong image and I went home and started writing it that night.

‘I really wanted to tell a story about a girl who experiences really bad anxiety and how funny and awesome she is. I wanted to write about somebody that really couldn’t be themselves at school, who was bullied, overlooked and considered weird. She has a difficult home life because her brother is very sick and she doesn’t want to burden her parents with the bullying so she pretends everything is fine. A lot of young people do hide bullying and a lot see bullying and don’t tell anybody. There is that instinct to hide what is happening, so I wanted to open up a conversation about mental health and anxiety that a lot of young people experience.

‘I entered the story into a competition at a literary festival and came in the top five. That is how I got my agent as he was one of the judges. It took about two years from when I started to when it was published.

Tamsin gave a talk to Year 7 students and also delivered a workshop for a small group of students based on the key theme in 'Being Miss Nobody' of speaking out.

‘A lot of what Rosalind went through was similar to what I experienced at school. I found school and being a teenager incredibly difficult, I didn’t enjoy it at all. Books were so important, a way for me to escape and understand my emotions and other people around me. I can remember very vividly what it felt like to be a teenager so I do have to channel that when I am writing to make it authentic.’

Being Miss Nobody was published in June to positive reviews and the charity Rethink Mental Illness chose it as their Book of the Month. Tamsin is currently working on her second Young Adult novel ‘Measuring Up’ a story about a 12 year old girl who wants to become someone else.

‘When I wrote Being Miss Nobody I didn’t think anyone would read it so I was only writing it for myself. When you are writing your second book and you know it is going to be published it is a lot harder, especially because I am writing about body image, which is a sensitive topic and something I feel really strongly about.

‘I would like to continue writing about adult and mental health issues for this age group because it is a key age, as young people are just growing up. When I was that age I loved Judy Blume, her books meant so much to me so I would like to be a modern version of her! For me the best part of being a writer is that feeling of having told a story that you really believe in, and one that you think might make a difference to someone’s life; that is empowering.’

Librarian Ms Wendy McCabe said 'It was wonderful to welcome Tamsin back to Brooke Weston and her visit was an inspiration for the students. She told them that she had always wanted to write a book for young people and encouraged students to pursue their dreams. Tamsin's second book is due out next year and Brooke Weston students were the first to hear what the new title was going to be, 'Measuring Up' which was a very exciting exclusive!’