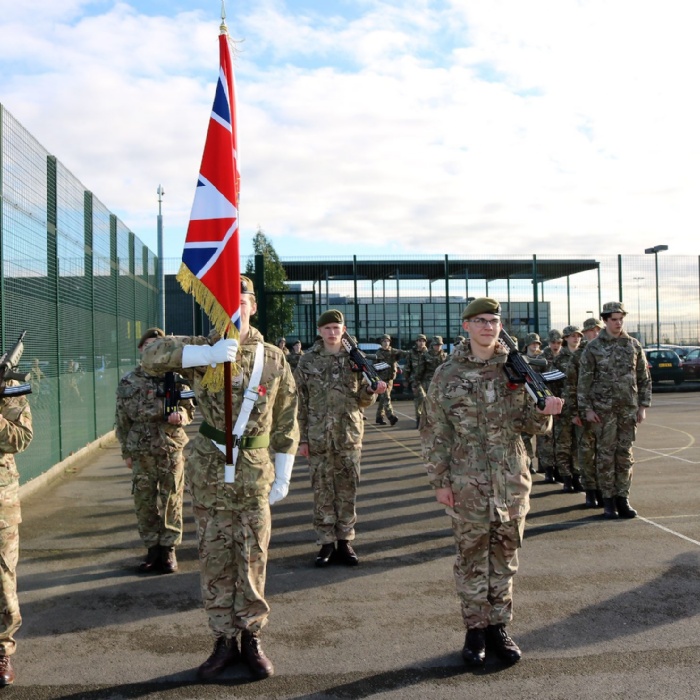 The Brooke Weston Trust Combined Cadet Force held a Remembrance ceremony and parade where the newest recruits were presented with berets to mark their admission into the contingent.

The event, at Corby Business Academy, was attended by parents and senior Trust leaders, including Principals and our CEO, Dr Andrew Campbell.

The colour party, comprising senior cadets, led the contingent for their formal parade. This was followed by a period of Remembrance with a poem read by Shay Stapleton, wreath laying and a minute's silence.

The Trust’s Director of Education, Trish Stringer, presented the newest cadets with their berets before promotions and individual awards were distributed.

Finally Miss Stringer was presented with the ‘Special Beret Award’ by Contingent Commander Capt Isherwood, as a thank you for her support for the BWT CCF since its formation nearly four years ago.

Afterwards she said: ‘This is a proud moment and this award means everything to me.’

LCpl Mountford said of her Best Cadet award: ‘I really enjoy CCF, it has been a great experience. I have learned a lot of leadership skills, it has made me more adventurous and given me confidence. I really love the field exercises when we take the rifles out and do military exercises.’

Cpl Reece Pollen said: ‘CCF is great experience because I am looking to go into the Army anyway so it is a perfect bridge from cadets to the military. I have had lots of experience that I can carry forward.’

Well done to all our cadets on a very professional parade. Congratulations to those who received awards and welcome to those who have just joined the contingent.