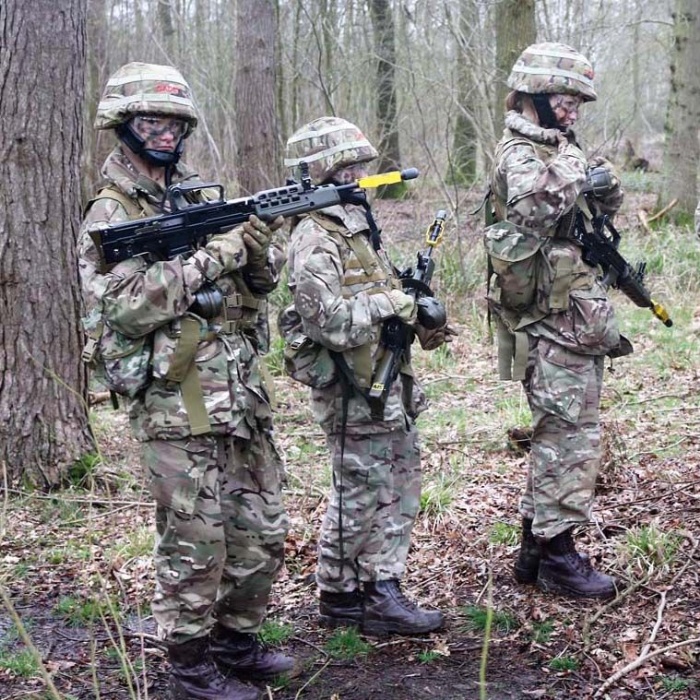 The event, at Yardley Chase Training Area near Northampton, tested their camaraderie and resilience. Cadets ate from ration packs, constructed their own bashas (shelters made from waterproof material and rope) and worked together on concealment exercises, patrols and night ambushes.

Contingent Commander, Capt Matt Isherwood said: ‘The field training exercises are an integral part of the cadets’ programme, alongside regular parades and annual camp. The training builds up in stages. First they learn how to keep themselves dry, warm and fed and then they do manoeuvres, night ambushes and drills that equip them for the large scale platoon assault and casualty evacuation on the final afternoon. It is exciting, challenging and, at times, gruelling but progressive training. A central and fundamental theme to all the training is the development of leadership underpinned by an ethos of teamwork, utilising the military themed activities.

‘In order to achieve success the cadets have to work together as a team under the command of a section leader. The weekend is all about taking the young people way out of their comfort zones and exposing them to different experiences, all under the watchful eye of experienced instructors.  It is our intent that, through their involvement with CCF, the students will encounter events and manage situations that the typical student will never experience. It is those controlled experiences that they can draw upon to gain greater confidence, resilience, self-awareness together with a strengthened appreciation of the need for teamwork which, in due course, we trust will give them an advantage over their peers.

‘Under the direction of a highly experienced Cadet Training Team Sergeant; the senior cadets, who are more experienced, have also been deployed into the field. They have been working alongside Reserve soldiers developing more advanced tactics, gaining increased independence in the planning and execution of their military themed exercises, experiences more akin to Officer and Recruit training. Importantly though coming back to interact with the younger cadets for the ambushes and the platoon attack.

‘The three-day Field Training Exercise is an experience that is tough and challenging but ultimately character-forming. The progressive training programme ensures that all the cadets leave with a great sense of achievement.

‘Thanks must be extended to the adult staff members from 7th Infantry Brigade Cadet Training Team, Brooke Weston Trust, Lodge Park Academy and 3 Royal Anglian- 2Coy who gave their time, without which we would not be able to deliver the event which gave the students three days of  camaraderie and unforgettable memories.’

Student Tate Eppey, from Year 10 at Brooke Weston Academy said: ‘I had a brilliant weekend, I thought it would have been more tiring and less fun. It was a great opportunity to get to fire blanks while in real life situations, as it's really different to when we've been learning about the L98 A2 Rifle in lessons.

‘ I was a bit worried about the reality of the situations we were going to be in when firing them, but when it came to the actual attacks, assaults and ambushes it was incredibly fun but also challenging, as I was 2IC and was given a lot of responsibilities in the Platoon Assault on Sunday. It also gave everyone a chance to get to know everyone else in our Platoon. I can't wait till the summer camp!’

BWT CCF’s annual camp is at the Barry Budden Training Camp in Scotland during the penultimate week of the summer term. It is a seven-day immersion in everything the training wing of the British Army has to offer; adventure training, rifle shooting on 300m ranges, extended field exercises and other high octane activities.