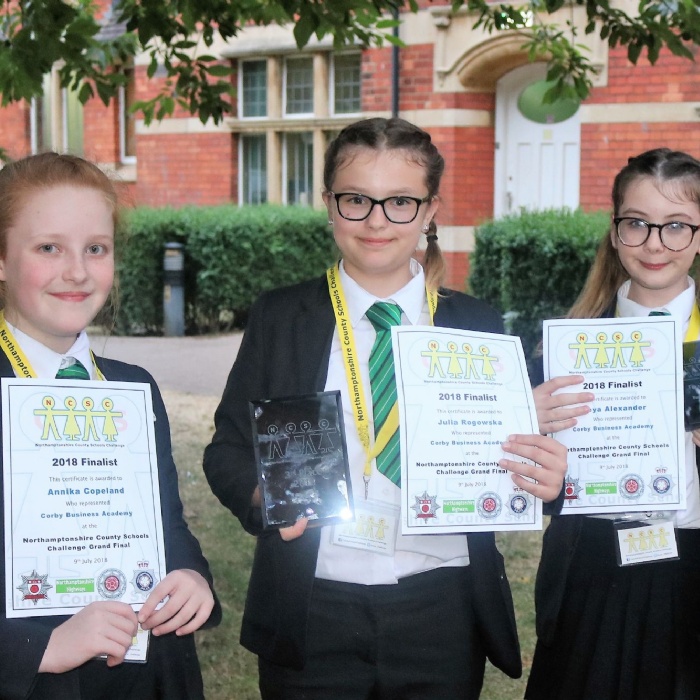 Well done to the team from Corby Business Academy whose ‘Flash Trap’ reflective clothing achieved third place in the final of the Northants County Schools Challenge winning £500 from Kier WSP to put the idea into practice.

Annika Copeland, Julia Rogowska and Freya Alexander came up with the concept of customisable black clothing with reflective stripes when they realised that teenagers preferred darker clothing to traditional hi-vis reflective wear. They gave a confident presentation to a panel of  high profile judges at the final, and were presented with certificates, a finalist trophy and the third place award.

The competition is run by Northants Police and Fire Service and each year they challenge schools to come up with innovative ideas to tackle a topic that is relevant to young people. This year’s focus was on road safety.

Three Brooke Weston Trust schools got through to the final stage, with a team from Brooke Weston Academy presenting about their app which highlights safe crossing places while a trio from CTS h produced a ‘Be Sensible’ rap which is available on YouTube and has been promoted on local radio.

The event at Castle Theatre, Wellingborough, was hosted by PCSO Alex Franklin, who was a familiar face in many of our schools and the judges comprised Chief Constable Simon Edens, Chief Fire Officer, Darren Dovey, Lesley Hagger, the Director of Children, Families and Education for Northants County Council, Louise McCann, General Manager of Northamptonshire Highways and Stephen Mold, the Northants Police and Crime Commissioner.

Each had the opportunity to question the teams on their products and they had the difficult task of picking the overall winners. Congratulations to Southfield School and Isebrook SEN who were awarded the top two places. The winning idea, of putting road safety themed street art at sites across the town, will be implemented with a budget of £2,000.

The judges commended all their teams for their efforts and said that by getting through to the final stages they were all winners. The focus of next year’s competition will be knife crime.

The team from Corby Business Academy were elated with their success. Julia said: ‘I was nervous doing the presentation and I am surprised to have won.’ Freya said: ‘It was really exciting and fun and I really enjoyed it.’ Annika added: ‘The highlight of the evening was being asked the questions because it builds your confidence.’

Sharon Scullion, Director of Business Studies at Corby Business Academy said: ‘I am so proud of the students, they have worked so hard on this. They have been a real dream team and their confidence tonight has been brilliant. This is the first year that we have been teaching KS3 Business so this was our trial. It has been amazing and this team has set the benchmark for next year’s students.’