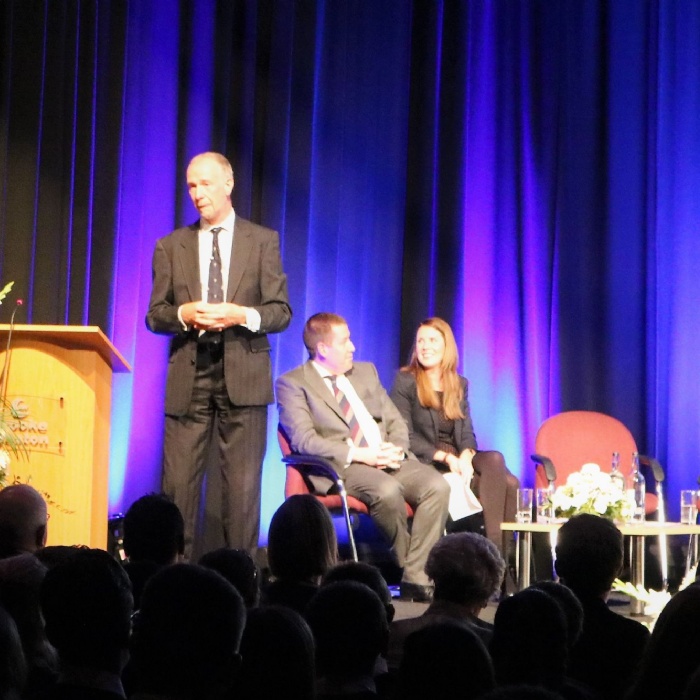 He spoke about how his early adventures led to both Arctic and Antarctic expeditions and he has achieved the ‘Polar Trilogy’, travelling unsupported to both North and South poles and travelling across Siberia. He encouraged our students to aim high and gave them valuable life lessons during his inspirational presentation.

It was an evening of firsts, as Head Boy Paras Bain and Head Girl Milly Simpson each spoke about their experiences as students at Brooke Weston and Academy Sports Colours were awarded for the first time. Recipients received a special tie that they can wear for the duration of their studies here.

Mr Dickinson told the audience how he became an Arctic warfare specialist with the Army before embarking on a number of expeditions, including a three week trek to the South Pole with the ‘Walk with the Wounded’ team, including Prince Harry and veterans with life-changing injuries.

He presented awards to hundreds of students. As well as subject awards there was also an ‘Endeavour’ category for each year group. Those who achieved top GCSE and A Level results this summer were commended and individual awards were made.

Student Nkara Stephenson gave a stunning rendition of ‘Don’t Rain on my Parade’ accompanied by Jon Rees, and Mr Phil Harris-Bridge, Chair of Governors, gave an address, outlining the remit of the Governing Body which tirelessly supports the work and aspirations of the school.

Thanks to everyone who contributed to the success of the evening, including those who sorted staging, lighting, sound, refreshments, artwork, programmes or who hosted visitors, to ensure that Prize Giving 2018 was a fitting celebration of our students’ achievements.

Congratulations to those who received awards:

Individual awards were as follows:

To see more photos from the evening click here: