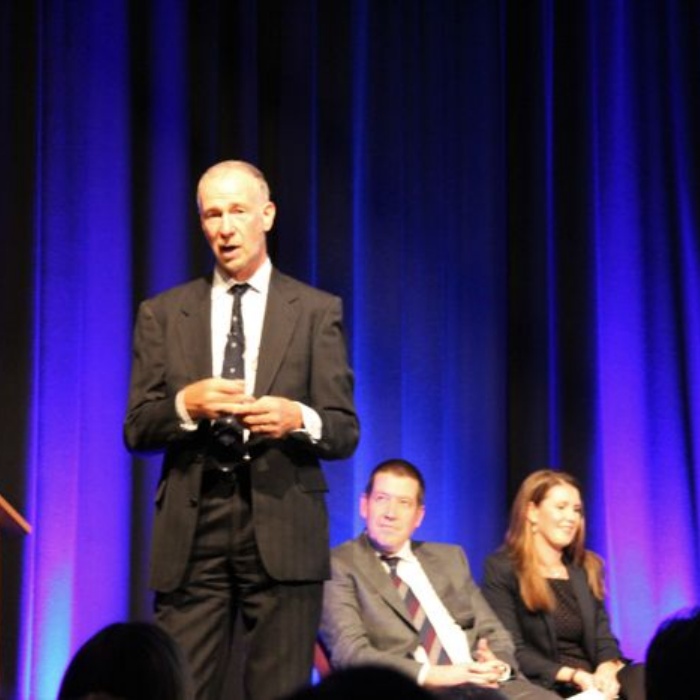 Conrad Dickinson was guest speaker at Brooke Weston Academy’s Prize Giving where he told students and staff how his love of adventure started early and progressed to him being the first and only Briton to complete the Polar ‘Grand Slam’ travelling unsupported to both North and South Poles, as well as leading a team to Siberia.

More recently he was part of the ‘Walk with the Wounded’ team, including Prince Harry and wounded servicemen, who trekked to the South Pole.

Conrad told the audience: ‘At 16 I went on an Outward Bound course doing sailing and orienteering, which was fantastic. Then at 17 I passed my driving test and drove around eight countries in Europe. I then wanted to go all the way through Africa to Capetown. My parents didn’t think it was a sensible idea so, being a bit headstrong, I set off to Greenland for six weeks! A bit of a pattern was developing as I was keen on adventure.

‘I joined a specialist unit doing Arctic warfare in the Army, training in Norway, so I was paid to learn to ski! I realised I wasn’t so bad on endurance so I decided to go for SAS selection. It was a gruelling six-month process where you have got to dig in and not give in. It started with 400 people and was whittled down to 12.

‘After that I started to go on a few expeditions and my wife and I crossed Greenland in 28 days. I said ”Let’s try something a bit harder” so we started at the edge of the Antarctic continent and dragged a 130kg sledge to the South Pole unsupported, turned around and came back using kite skis.

‘My next big trip was to the North Pole which is deemed to be the hardest expedition in the world. Canadian Richard Weber and I battled our way to the North Pole over 52 pretty miserable days. It highlighted global warming because I crashed through the ice and Richard came to help me, so we were bobbing around in the Arctic Ocean at minus 25! We got out of that, got to the North Pole and there was no fanfare, we just sat there looking at each other although we felt pretty good inside.

‘I have probably done 60 or 70 expeditions and the biggest privilege of my life was three years ago when I was asked to lead the British team, including Prince Harry, in a race to the South Pole in a team made up of wounded soldiers who had had horrendous injuries in combat. They had lost arms, were blind and the most amazing guy had no legs and he skied to the South Pole! It was unbelievable and humiliating to think that we go around complaining. That really demonstrated to me that if a person can ski to the South Pole with no legs, then everybody in this room should be able to do the most amazing things. You can do anything you choose to do.

'You have all these facilities and opportunities at this amazing school so grab them all. I guarantee that once you realise what excites you that is what you have got to focus on. You don’t know where it will lead, there will be obstacles to be overcome and there are a million and one unknowns and various people will dissuade you. Don’t be dissuaded. If you do follow your dream then success will follow.

‘Your teachers and parents want the best for you, so on this journey of success that you are on, remember to say a few ‘thank-yous’ along the way to all these fantastic teachers who are supporting you to do the best with your lives.’