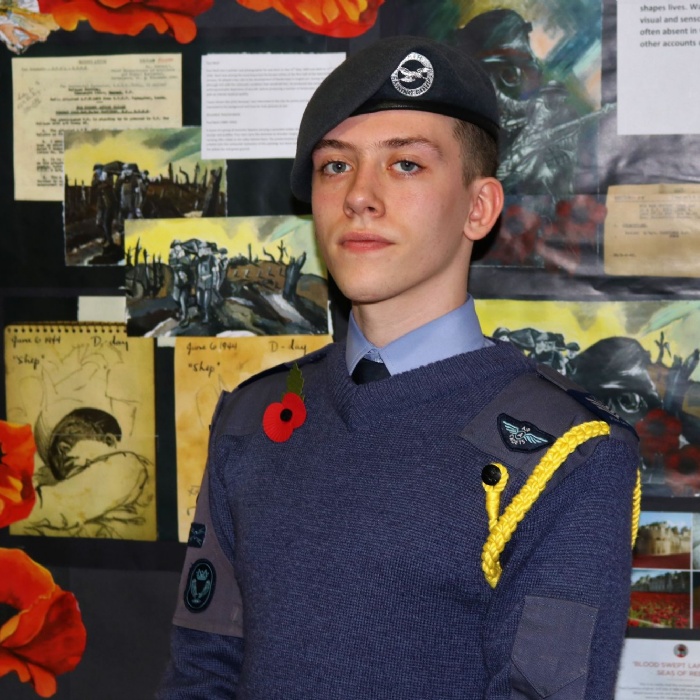 Sixth Former Reece Pollen co-ordinated this year’s Remembrance assembly at Corby Technical School, a task he has been doing for the past few years.

Reece, who is a member of the Air Training Cadets, chooses a different theme each year. This time he focused on the brave men and women who had been awarded the Victoria Cross. Members of the CCF and ATC cadets presented the assembly featuring 12 servicemen and women who were decorated for their gallantry including LCpl James Ashworth VC, who lived in Corby and was killed in Helmand in 2012, aged just 23, before the school observed a minute's silence.

Reece said: ‘The assembly is something that I do every year. The first year I focused on poetry and last year I wrote a piece about all the Services and why the British Legion sell poppies.  I try to do something different each time. Remembrance is important to me because I have been a member of both the Army and Air Cadets, and I want to go into the Army as an engineering officer.’

It took him three weeks to put his presentation together, a task he did around his A Levels in maths, further maths, physics and engineering. He also included Buster, a military detection dog who had been awarded the Dickin Medal, which is known as the Animals’ VC: ‘The Service animals also make a hugely valuable contribution and they can be killed, or suffer the effects of war so that is why I wanted to include him, alongside his human counterparts who have been  recognised for their bravery.’