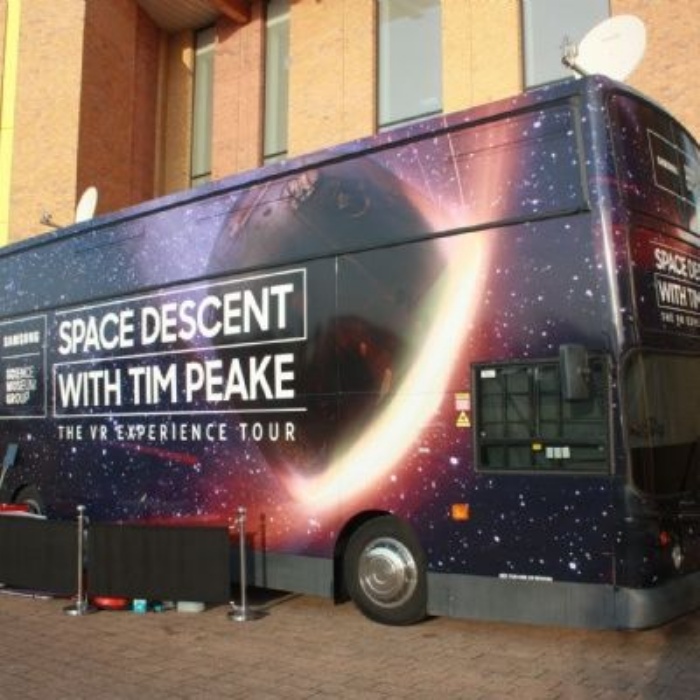 Students experienced what the descent back to Earth was like for British astronaut Tim Peake when a specially-adapted bus fitted out with Virtual Reality stopped off at TCA, during The National Tour of Tim Peake’s Spacecraft presented by Samsung and the Science Museum Group.

Space Descent with Tim Peake – the VR Experience Tour visited TCA, with the aim of creating a buzz around space exploration and to bring to life the STEM subjects of science and maths.

Tim Peake is an astronaut with the European Space Agency. He spent 186 days working on the International Space Station (ISS) where, during his first month, he conducted a spacewalk to repair the Station's power supply. Tim returned to Earth on June 18 2016 in a Soyuz TMA-19M capsule, which has been on display at various locations around the UK and most recently, at Peterborough Cathedral.

As part of The National Tour of Tim Peake’s Spacecraft, Samsung is working closely with the Science Museum Group on a national schools outreach programme, aimed at engaging young people in STEM subjects and inspiring a new generation of burgeoning space explorers. As part of the programme, an educational and interactive bus has been developed to give students an insight into space travel and what life is like for astronauts working on the ISS.

The lower deck is designed to look like the ISS, complete with views of Earth. TCA students completed four modules of space training, including taking off in a rocket and landing safely back down to Earth. Subjects like chemistry were brought to life when students had to work out the correct quantities of carbon, hydrogen and oxygen to make rocket fuel. They also had to draw on maths skills to calculate the correct angles required for a safe decent to Earth. Students learned how much of the original 1950s technology is still in use and how the ISS has been developed by different countries over time.

On the upper deck, students donned Samsung Gear VR headsets to experience in 12 minutes, the 3.5-

hour descent to Earth that Tim Peake completed, narrated by the astronaut himself.

Students were interested to learn that astronauts recycle their urine for drinking water, have to exercise for two hours every day to prevent the wasting effects of zero gravity on their bodies and that Tim Peake found the hardest part of his training was learning to speak Russian fluently.

Event Manager Edward Hall said: “The purpose of the tour bus is to get students interested in science and space, to let them know what’s happening and how exciting it is. We want to inspire them to learn more about science and engage with it as a subject.”

Older primary school pupils were also invited in to visit the bus, as part of an on-going partnership between TCA and primary schools to develop the teaching of science.

Steve Tarsitano, TCA’s Director of STEM, said: “This was all about engaging with science and celebrating the sense of wonderment that science can bring. Everyone is naturally curious about things around them and whole point of having something like this in school is to reignite that curiosity and engagement with science.”

Students were fascinated by what they learnt and were keen to find out what life is like working in space.

Year 13 student Dylan Graham said: “I was mesmerised by the experience. What I found amazing was that astronauts can be so high up in space – 400km - and then be back down to Earth so quickly.”

Joshua Watson, in Year 11, said it was thought-provoking. “There is massive risk around space travel with the risk of loss of life and equipment,” he said. “It shows they need people who are prepared to take that risk. Without science, we’d be nowhere.”

Charles Jepson, also in Year 11, added: “Something like this helps to show the rate at which science is advancing. It puts it in perspective for us, which is very important.”