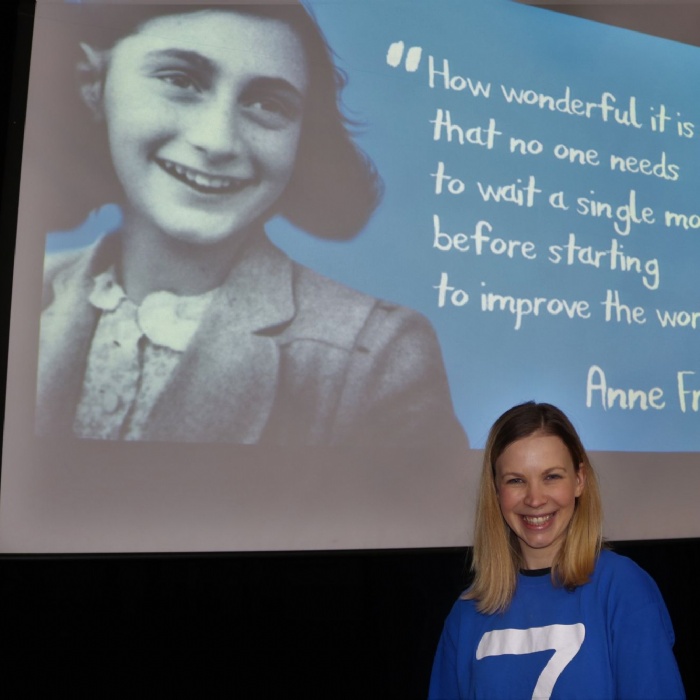 Believe Big, a competition to come up with life changing ideas to benefit the planet, is being launched across our Trust secondary schools this week.

The initiative, which is run by 7 Billion Ideas, encourages students to think creatively, make presentations, posters and jingles and promote their innovative concepts to panels of judges. The best ideas from each school will go through to a Trust Grand Final later this spring.

Facilitator Annie Gregson launched the scheme in a series of assemblies and presentations this week.

She spoke about some of the quirky ideas that have made the world a more fun or interesting place. These include a set of stairs that were transformed into a piano so that pedestrians could play music  as they walked up them. Others included a ‘baby mop’, a romper suit that collected dust as a baby crawled on the floor and even a special umbrella for dogs!

She told students: ‘We believe that every single person on this planet has a really good imagination and the ability to change the world. 7 Billion Ideas was founded by a group of friends who liked to get together and share ideas. One day they thought “wouldn’t it be cool if you could extend that and bring together ideas from other people of all ages?” That is why we have this Believe Big competition. It is now in its third year and over 1,000 students are taking part from five different schools in the Trust.

‘It is predicted that by 2030 85% of the jobs that you will go into haven’t been invented yet. When I was your age I-Phones hadn’t been invented, Netflix wasn’t a thing, nor was YouTube and we were on PlayStation 1! It is the same for you, everything you learn at this school is building you up to gain a really decent education, but there might be one or two skills that you may require that we don’t know about yet because the technology hasn’t been invented. What is definite is that whatever line of work you go into you will always need an element of creativity.’

She gave examples of young people who had invented world changing ideas including an underwater system of communicating, called Water Talkie, dreamed up by a ten year old, or Louis Braille, who had largely invented the Braille system by the time he was 15.

Annie said: ‘This competition helps you to be creative, capture ideas and, over the next few weeks, we’ll encourage you to dream big. Two of the teams from this school will be chosen to represent the school at the grand finale and, eventually one overall idea will be crowned the winner. That winning idea will be turned into a book, which will be available on Amazon. Be brilliant but, most importantly, have fun.’