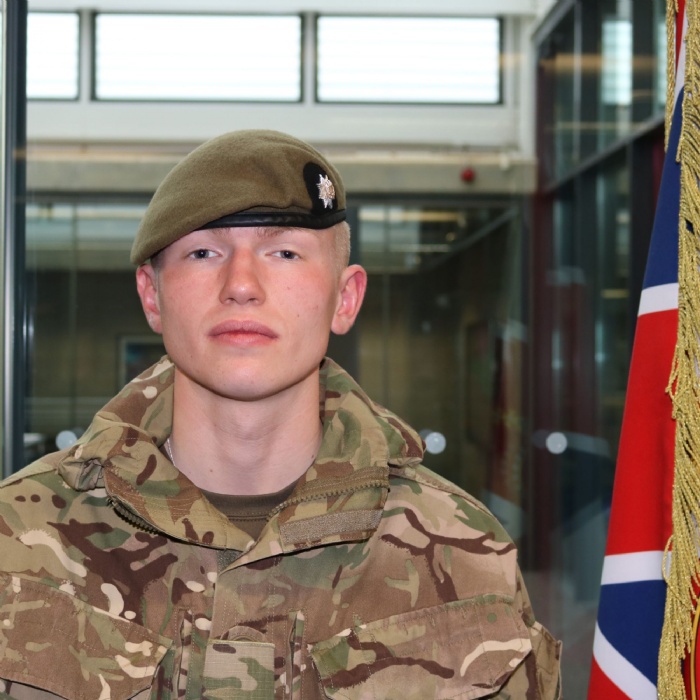 Former Brooke Weston Academy student and CCF cadet Pete Sammons is volunteering his time to get the current cohort ready for the Combat Cadet competition.

Pete, who achieved the rank of Colour Sergeant during his time in the Brooke Weston Trust CCF cadets, returned to support the platoon at November’s Remembrance Day Parade. He missed being involved and so is coming back for one afternoon a week to help train the cadets.

Pete, who was in the first CCF intake and one of our most successful cadets, said: ‘ I have been trying to help the Combat Cadet team get up to scratch. Because I have done that camp before I can relay my experiences back to them. It was the only time we have done it so, hopefully, I can pass on that information and also use what I have learned from being an Army Reserve.

‘There are big fitness and urban warfare elements alongside the normal fieldwork section attacks but they have also put in lots of things we haven’t done before. We have a team of nine cadets and there are 22 different teams going, all the way from Lincolnshire to Essex.

‘The key thing is to work as a team, help out whoever is in charge and make them look good. If you don’t do that it will crumble.’

Pete is currently taking a gap year and is hoping to join the Army full time: ‘The main things I got from Brooke Weston’s CCF was teamwork, punctuality, the way you should communicate with people effectively, whether it is passing down orders or passing them between your peers. Being part of the CCF just makes you a more effective individual. It is nice to be back!’

WO1 Nigel Barrett said: 'We were delighted when Pete decided to come back and share his experience, not just of Combat Cadet but also of the four years he spent as a Cadet.  Fortunately for us he is also an excellent instructor and loves passing on the lessons he has learnt.'

Contingent Commander, Capt Matt Isherwood said: 'We are delighted that Pete has volunteered to provide assistance to the CCF. He was, and continues to be, an excellent role model to the Junior Cadets, not only do the BWT CCF cadets benefit, he is also supporting Lodge Park to develop their CCF. Pete Sammons is a shining example of the impact of the Cadet experience.'