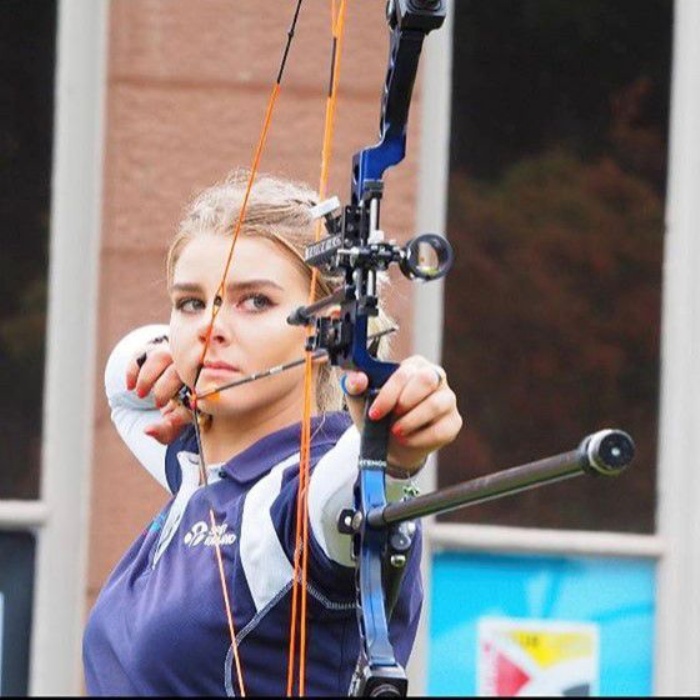 Iulia only took up the sport three years ago and was such a natural that, less than a year after starting, she won the national junior competition. She practices for three hours each day and also takes part in GB training camps at Telford each month.

Iulia combines her sport with her schoolwork. She is studying art, sport and English at A Level and aspires to be a professional archer.

Iulia said: ‘In primary school I went on a PGL trip where we did archery and I really liked it. I was swimming and I begged my mum to let me quit swimming for archery. It took ages but eventually I persuaded her!

‘I joined Corby Archers three years ago and use a compound bow. They are really technical pieces of equipment and we shoot smaller targets than normal. I shoot all year round. When I first won the nationals I had only been doing the sport for about ten months and all my competitors had done it for at least 12 years!

‘For GB and international competitions there is only one round, called 720. You shoot 72 arrows and can score a maximum of 10 points per arrow. I shoot from 50m and my highest score is 675. I would like to be a professional archer and have got sponsorship. I now play in the adult competitions and am ranked about 25 or 30 for adult women in the UK.

‘My first international was at the World Championships earlier this year in Nimes. I came 20th.  You have to go through a selection process where you are put under pressure so that tests our skills.

‘Our GB team consists of four boy and four girls and it is nice to all get together. We will be doing individual and team shooting in Bucharest next month. I am looking forward to it because I have friends from the other teams and we barely get to see each other unless we are at the internationals.

‘Archery is a good sport because, you don’t have to stop at a certain age although it is very expensive to take part in. My bow type isn’t in the Olympics but they are fighting to put it in for 2024 so if it is eligible then I will definitely try and qualify. The school has been very supportive and encouraging with my sport so it will be great to see how far I can take it.’