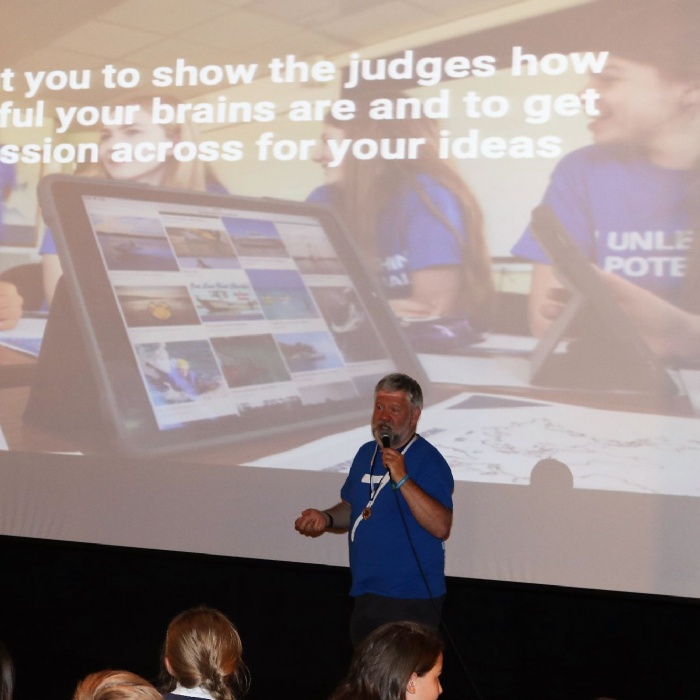 Well done to all of our Trust primary schools that took part in this year's Believe Big competition. There were some stunning ideas. Here is a round up:

Team Pollen consisted of Ethan, Leah, Isobel and Delia. They created a range of products to help combat hay fever and allergies.

Leah said: ‘We made a cream, washing up tablets, sprays and a teddy bear that smells like lavender.’

Ethan said: ‘I loved making the products, especially the washing up tablets.’ Leah said: ‘I liked everything because I like teamwork and helping others. Delia said: ‘I liked painting the bottles because I made a pattern on them. We made examples of all our products.’

Isobel said: ‘I liked testing out all the patterns, textures and colours. I was really pleased when we won. I was so overjoyed. It is also a good thank you to Miss Johnson and Miss Baloghova, who helped us with the project.’

A Breath of Fresh Air comprised Joseph, Darcy and Skylar. They developed a drink to make flatulence fragrant! Skylar said: ‘You can pick from a variety of smells and tastes and you can have it with your dinner. It is relatable to lots of families. My teacher thought it was a great idea and very funny!’ Joseph said: ‘I liked the drink because you can tell that it is going to be nice when you sniff the flavour.’

The Recyclables were Charlie, Chloe, Harry Millar and Scarlett. They made a bin that automatically recycles waste. Harry said: ‘It is a bin that sort out recycling and reduces the amount of waste in our oceans. There are sensors inside and it senses the material you put in, then opens a flap to sort it into a container. It also filters out water as well.’

Team Bounce comprised Charlotte, Baylee and Harley. They developed springy clothing that will keep you safe if you fall over. Charlotte said: ‘If you are pushed or fall over you can bounce back up and carry on with your day.’ Baylee said: ‘The best thing about this project is that it will help you if you are clumsy. It is meant for the elderly because they lose their balance and fall over a lot.’

Harri and Richie were two members of Team Robo, who developed a personal protection robot. Harri said: ‘It has stretchable arms and rocket boosters. The best thing about this project was all of it!’ Richie said: ‘I liked putting the antennae on the robot’s head!’

Team Cloud consisted of Amber, Ruby and Sybil. They invented an anti-pollution machine, shaped like a ladybird, with a filter to produce clean air. Sybil said: ‘We thought it would help the environment because there is a lot of pollution around so we wanted to make cleaner air.’ Ruby said: ‘My favourite part was making the ladybird model.’ Amber said: ‘I liked working together as a team.’

George, Henry and Noah’s team was Helpful Handy Dog. Henry said: ‘It is a robot dog on wheels and help disabled people by storing things like toothpaste, keys and money or it can even make a cup of tea. We thought of it as a team, it is voice activated and we all helped to make the model.’

CPJO team comprised Caitlin, Phoebe, Jessica and Oonagh. They developed the Homeless Helper robot which will dispense a care pack containing a first aid kit, book, food and tissues. Phoebe said: ‘My favourite part of the project is that we would be helping homeless people.’ Caitlin said: ‘It is being kind to people because they deserve a life like us.’ Jessica said: ‘My favourite part was helping to make the poster.’

The Turtle Litter Picker was invented by Fin, Anya, Izzy and Emily. It is a litter picking machine for the ocean.Fin said: ‘I am very interested in wildlife and really annoyed about what is happening to all the animals.’  Anya said: ‘It was fun because we are all so passionate about the oceans and wildlife and it was really fun to create it. I believe it can change the world.’

Izzy said:  ‘It is a perfect idea because nobody wants litter in the ocean. They want to have a fun time on the beach and swim around.’ Emily added: ‘I like this idea because it will save animals, the ocean and the planet.’

Tranz2019 from Oakley Vale comprised Alfie, Georgia and Gaby. They dreamed up a collar that can translate human language and animal sounds. Alfie said: ‘We thought this would be a good idea because if we are a bit lonely or are not feeling well our animals can go and get help. I would ask my dog if she likes the environment she is in at the minute.’

Recyclator 3000 was invented by Dominic, Ebrahim and Rochelle. It is a machine that recycles waste material into something reusable. Rochelle said: ‘You put any type of material that can be recycled in and it will come out as something new. There is a need for it because of all the plastic that is going into the ocean. It will help save millions of sea creatures from dying because of plastic.’ Ebrahim said: ‘My favourite part was doing the posters and information.’

The Magic Pen is a robot device that helps disabled people to communicate. It was invented by Julia, Jorja and Habib. Julia said: It’s a magic pen that writes for disabled people operated by a robot. It never spells anything wrong and it has a maths and English pen. The fun thing about it is that the writing can change to any colour.’

Enrika, Amy, Tegan developed PetChef, an automatic pet feeder. They said: ‘Most people don’t have enough time to feed their pets so you put in enough food and it automatically fills the bowl when it is empty.’

Football Go was the brainchild of Augusta, Issy and Lily. It is a virtual reality ball game that can be played using interactive goggles. Lily said: ‘I love doing football club so it is a great game.’ Lily: ‘I am really sporty so I would play this.’ Augusta said: ‘You could get it on an app and use the game with any sport that uses a ball.’

Boost Boards.com was the invention of Edvard, Rhys and Urte. Edvard said: ‘It is a skateboard powered by wifi, so it can help the environment. We came up with the idea so that you can have as much fun as possible!’