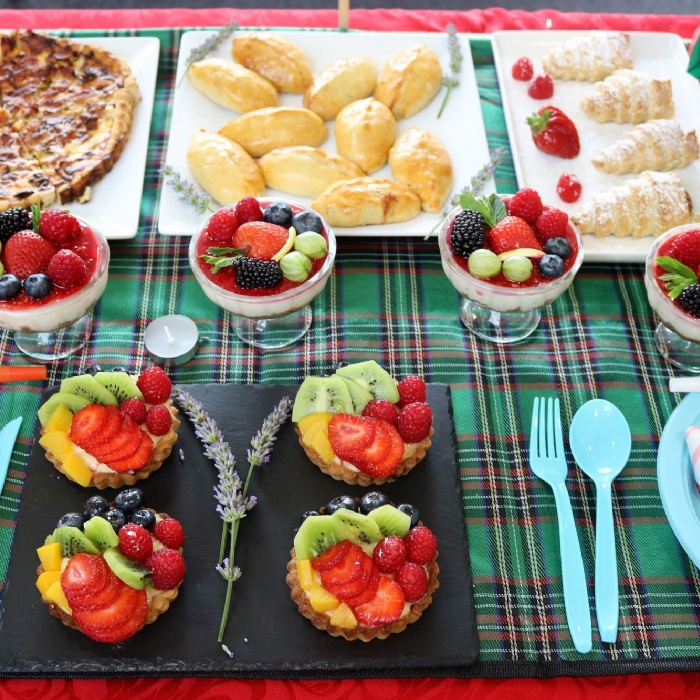 Well done to four of our Trust secondary schools who cooked up a storm in this year’s Bake Off competition.

Students from each school have been preparing for weeks for the challenge, staying on after lessons to bake different recipes and create a themed menu especially for the event. The teams had to create three desserts, two savoury items and a drink.

The competition has been running for years and is co-ordinated by Trust Catering Manager Chris Lapsley. He said: ‘It has really been a good standard and each school is upping their game each year.’

There were only three students in each of the teams. They had just four and a half hours to get their food prepared at the final, held at Thomas Clarkson Academy. Chris Stewart and Tim Laws from the Trust Central Team, along with Chris Lapsley and two catering suppliers were on the judging panel. They scored each item on consistency presentation and taste.

David Campbell said: ‘We chose Toy Story because of the new movie. I did the toy box meat loaf and the potato heads. Coming from the trials to the finals mean that we have become close friends and I do a lot of cooking at home.’

Emily Cleary said: ‘I made the bed out of Victoria sponge and the biscuits. The last half hour was the biggest rush. I really enjoyed the baking and creativity of the project.’

Debbie Riley the senior technician who runs the Bake Off competition at CBA said: ‘The students have really enjoyed it and worked well together over the six week trials. Doing a process like this promotes food technology and gets students used to planning, cooking and learning to read recipes. Our team has been consistently good, winning their heats each week.’

The Corby Technical School team was Tom Jones and Abigail Bayliss, both from Year 8, along with Year 7 student Olivia Whitty. They produced a specialist vegan menu and enjoyed the process so much that they would like to enter the competition again next year.

Tom said: ‘We finished really early so we only had to add the finishing touches after lunch. We felt quite confident. It is nice to learn how to cook and to have transferable skills, like working under pressure, being judged and facing constructive criticism.’

Abigail created the ginger and rhubarb muffins and cheese scones. ‘We picked dishes that we knew we were good at to bake in the final and we had baked them all at least once before.’

Olivia made the vegan chocolate shortbread biscuits and jam tarts. ‘I enjoyed the baking because we have been doing it at school but it has been really intense because people get knocked out in the heats. I would love to be a world-famous chef or baker like Gordon Ramsay, it would be a huge achievement and I have always had a passion for baking.’

Teacher David Harley said: ‘We started with 15 students and have whittled them down with different challenges over the weeks. All of our students worked so hard. We went for a vegan menu because it is on trend at the moment so eliminating dairy products, eggs and milk adds an extra challenge to the process. The students are well organised and have worked together well. They have been so independent in the classroom and follow the recipes exactly so it really builds their skills and confidence in the kitchen.’

The Thomas Clarkson Academy team comprised Seth Briggs-Williams and Hollie Dixon from Year 9 and Year 7 student Diana Togodina.  Seth said: ‘I made the cream horns and the burger buns. Cooking is a hobby.’

Hollie said: ‘I made a leek, bacon and onion quiche, fruit tart and the lemonade. I thought as we were doing a summer party lemonade would be really fresh and fruity. I am a keen baker.’

Diana said: ‘I made the burgers, cheesecake, summer juice and pasties. It was a lot of work to make them all but I just got on with it. My favourite thing to bake is desserts. I really enjoyed it today. I want to do it again!’

The TCA team were helped by Food Tech teacher Jelena Tjurina. She said: ‘We have chosen quite complex dishes to produce from the GCSE specification. The presentation was very colourful. The students chose the dishes and have worked really well together as a team.’

The Kettering Science Academy team comprised Jessica May from Year 9 and  Amber and Isabella from Year 8. They chose a Roald Dahl theme.

Jessica said: ‘We prepared everything in bits so we didn’t get overwhelmed.  The Bake Off competition has been really fun and it is nice to work with other people. The competition has helped me schedule my tasks and plan a project.’

Isabella said: ‘We worked well together as a team, which was a big part of it.’

Amber said: ‘I made pesto to go on the flatbreads, helped with other stuff and tidied up. It was a challenge today. I have learned that it is easier to work in a team and help each other.’

Hayley Wills, KSA’s design technology teacher said: ‘I am so proud of them. Their confidence and independence has grown massively. They have learned to problem solve, been independent and prepared. They have been really committed to the competition and it has been enjoyable. I have loved watching the heats and seeing how they are progressing. The bakes have all been consistently good and the scones and individual pies have been quite a success.’

To see a gallery of pictures from the event click here.