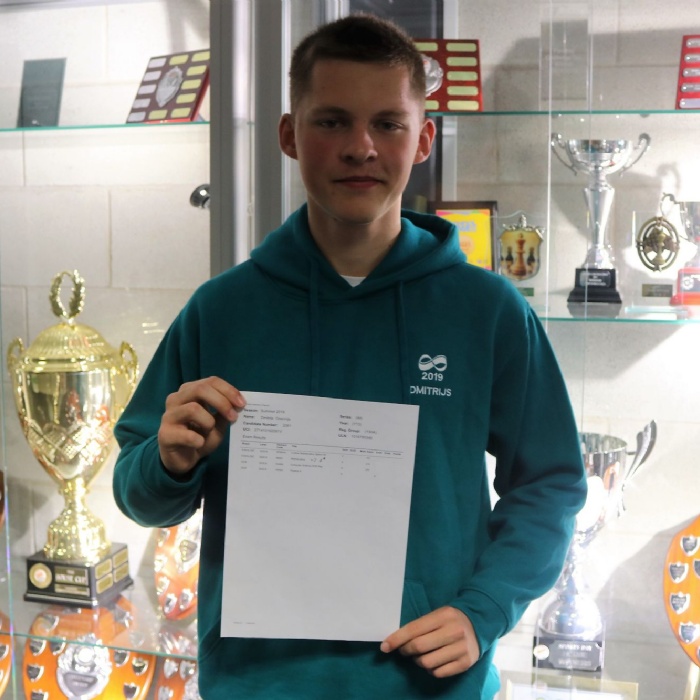 Well done to our high performing students at Corby Technical School who are off to a variety of university destinations.

Dmitrijs Gnennijs achieved As in Maths, Computer Science and Physics and is going to do a computer science Masters degree at Southampton University.

He said: ‘Eventually I want to become a programmer doing coding for large companies and solving problems. I have always like computer science. It is interesting as you have to problem solve and be creative.

‘I came to CTS in Year 7 from Latvia and English is my third language so I had to learn it from scratch.  I am quite determined and the school has been great and has been very supportive over the years, particularly the English teachers, who were great and helped a lot in the first weeks of me learning English.’

Stefan Ciocoiu is celebrating his A in Computer science, B in Maths and C in Physics. He is going to the University of York to study Economics. He said: ‘I like the subject. It is the only topic I like to do in my spare time. I usually treat any other subjects as schoolwork whereas I read up on economics due to curiosity.

‘I hope to do a masters degree and don’t know what career path to take but it’ll be something related to economics. I am most pleased about my Computer Science grade because in September I was at a D level and I got it up to an A.

‘I put in a lot of work every day because otherwise you are not going to get anywhere. My advice to other students would be when you are marking your mock papers always be hard on yourself, because the examiners are probably going to be as well. Don’t be lenient on yourself, mark it down, try harder and that is how you are going to get the grades. English is my second language. I have been here since Year 11 and have enjoyed being at CTS.’

Kayleigh Palmer was awarded an A* in Media, A in Psychology and B grades in English and Art. She is going to Birmingham City University to pursue an arts-based course. She said: ‘I wanted to do interior design or set design and the university has a three-year Design for Performance degree, which is interior and set design together, plus more. It will lead to designing for things like theatre, performances, Madame Tussauds and attractions like that.

‘I tried hardest at Art and English. I am surprised with my Media Studies result although I worked hard for that. I have been at CTS since Year 12 and came here for Sixth Form because it was small and close knit.

‘My advice for students would be don’t mess around in Year 12 and keep your head down. Maybe do pre-reading before the lesson and get prepared as that really works.’