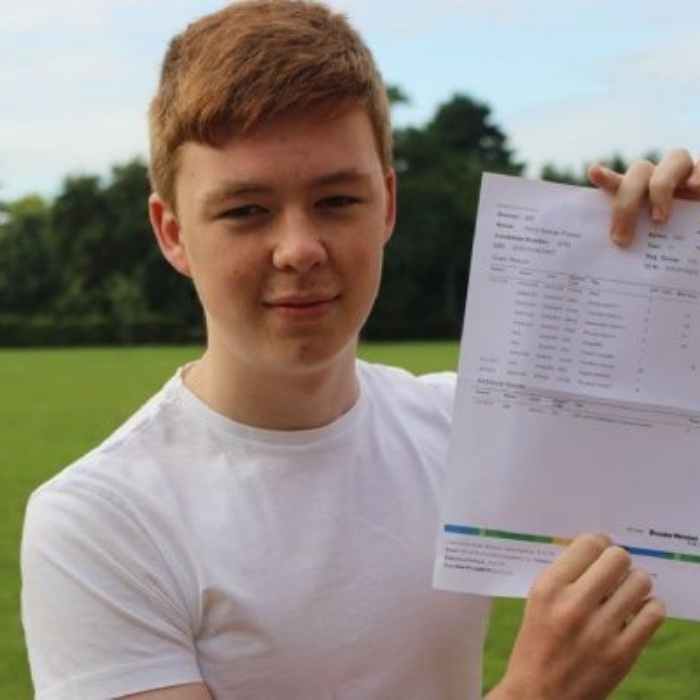 This year’s GCSE results at Thomas Clarkson Academy are among the best for attainment in the school’s history, demonstrating the academy’s continued drive for improvement.

The number of students achieving the top grades, 9-7, has yet again improved this year.

Among the top achievers was Harry Preston (pictured above), who was awarded two 9 grades, two 8s, three 7s and a distinction*.

'I felt nervous with the anticipation this morning,' he said. 'I was confident I would do well but I didn’t think I’d do this well. I couldn’t believe it when I opened my results. I was nervous about different subjects and then I got them all, so it was just a relief. I’m most happy with my 9 for maths and 9 for chemistry.'  Nationally, only 4.5% of all grades were a grade 9, which shows just how well our students who achieved grade 9s have done.

Shae Naidoo also did extremely well, achieving five 9s, two 8s and a 7 and attributed her success to switching off her mobile phone during her months of revision.

She said: 'I’m relieved to get my results and I’m happy with how I’ve done. I’m most proud of getting a 9 in chemistry because so much of it depends on how much you do yourself. I’d like to go on to university to study astrophysics.'

Justina Kakstyte said she was so nervous she had to get someone else to read her results but was delighted to hear she’d achieved two 9s, two 8s, two 7s, a 5 and a 4. She is planning to do A levels in biology, chemistry and maths, with a view to going into medicine.

She said: 'I looked at the grade boundaries this morning and was worried I hadn’t done that well, but I had, so I just cried. I felt very overwhelmed but so happy and pleased with myself.
'I revised a lot – I tried every method going until I found one that worked for me and then stuck to that. I had flashcards all over my bedroom, in every single colour.'

The academy is also very proud of Phoebe Porter who, de

spite facing health issues which kept her off school from January, achieved an 8, two 7s, two 6s, a 4 and a distinction*.

She said: 'I was on study leave because I was quite ill so I’m really shocked and happy with my results. I’m very happy with my 7/6 for combined science as I was predicted a 5. I’m proud of myself. The school has been really supportive and made sure I always had everything I needed.'

Associate Principal Richard Scott said: 'This year’s GCSE results are amongst the best the school has seen and are indicative of the improvements that have been made in recent years. It builds on the success of the last two years, which saw TCA recognised as the most improved school in Cambridgeshire.

'It again shows our unwavering ambition for every single student at TCA as we continue to strive to achieve the best for the young people of Wisbech. I would like to thank the staff at TCA for their efforts and students’ families for their support.'