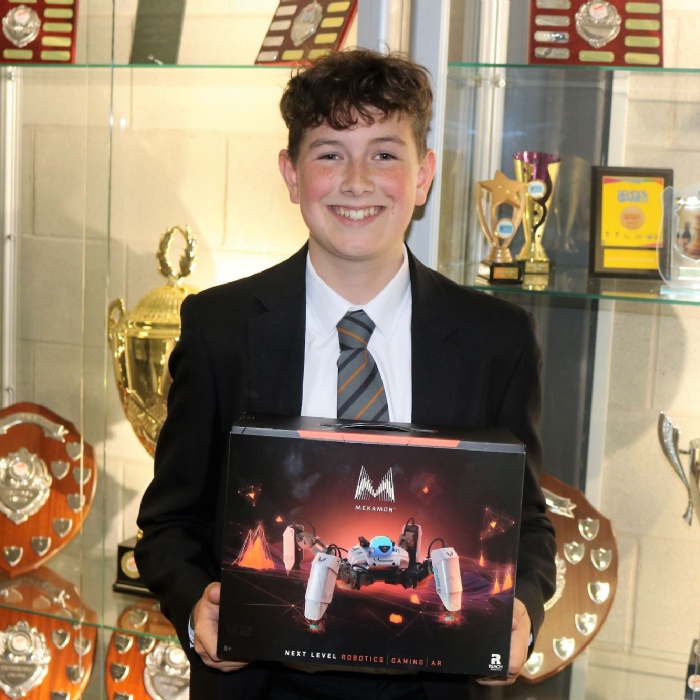 The science and technology event allowed students from all over the area to try out science and engineering activities and access the latest technology. One of the most popular exhibits was the Mekamon, which responded to an app by performing various movements including sneezing!

Students were asked to submit feedback forms on the event, which took place in July. Tom’s feedback was judged to be so good that it has been distributed through the top ranks of the company.

Laura Giddings, the STEM Education Manager, Northern Europe told the school: ‘Tom sent through one of the best feedback forms I have seen for the whole event! We received dozens of feedback forms but his stood out from the very beginning, so much so that I have included some of his comments and opinions in my review of the event to the wider business, many of whom were colleagues from other countries looking to run a similar event – even having our President and CEO read his review first hand!’

Tom was delighted to be presented with his Mekamon in assembly at CTS.

Afterwards he said: ‘Stemfest had lots of different workshops and technologies. A lot of them were involved around engineering and the future of work. I used the skills that I learned in lessons to make the Mekamon do over 20 things, including flips, scratching its armpits and moving around. I thought it was really fun and definitely one of the highlights of the day. I was elated when I found out I had won one as a prize!

‘My review was a run-though of what happened on the day and all the different workshops we did. People from all over the area came along because engineering and STEM is especially important to this school and the Brooke Weston Trust. I want to eventually go into some sort of creative and technical career and so events like Stemfest really help encourage us to think about what is available. I didn’t expect to win the Mekamon so I’d like to thank RS Components as this is such a great prize!’