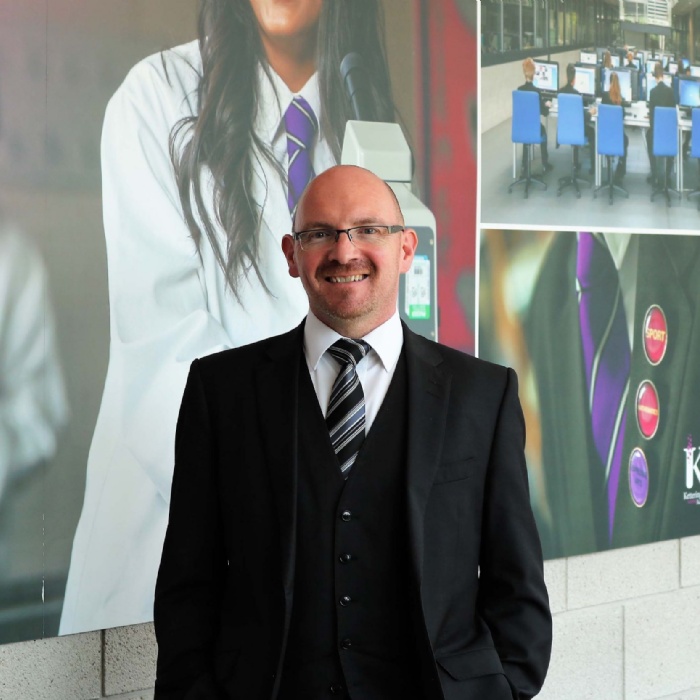 Kettering Science Academy’s outgoing Principal, Mr Paul Davies, says that the school’s staff are the most ‘positive, passionate and committed’ team he has worked with in his 25 years in the profession.

Mr Davies has been in post since April 2013 and, having guided Kettering Science Academy through leadership and curriculum changes and driving up behaviour and attendance, he has decided that now is the time to move onto his next career challenge.

He said: ‘I am most proud of the fact that the students now really value the school. Attendance is well above national average, behaviour is much better and the students are very positive. Parents recognise that improvements have been made and the community feels this is a good news story. Kettering Science Academy is now a positive school.

‘The new curriculum has come into place over the last 18 months. We have had a new leadership team and the staff are incredibly positive, passionate and committed. They are the most committed team of people I have ever worked with. Working with the children and staff has been a highlight of my time here and our support staff do an incredible job. They are the unsung heroes of the school and add a lot of value.’

Mr Davies says it was being ‘relentless about very high expectations’ and ‘focussing on the quality of the classroom experience for students’ that has made the most impact during his tenure: ‘Students are much more positive towards one another and much more positive in lessons as well. There is so much more to do but I am passing on a stable, secure school to my successor.’

Mr Davies is moving on to a very different educational setting, as Principal of a small, independent, outstanding school. It means he will return to classroom teaching as a historian. He said: ‘Running Kettering Science Academy has been fantastic but I now want to move to something completely different where I can combine my management and leadership skills and my history specialism.

‘Being Principal at Kettering Science Academy has been a tough job but I wouldn’t have missed it for the world.  The qualities I brought to this role were communication, collaboration and humility. The age of the superhead, the one person who can turn things around, has gone, so you need to be a team player, to create leaders around you and you also have to work as part of a Multi Academy Trust. The landscape of education in the 21st century is a very sophisticated one and you can’t just be the maverick headteacher that thinks they know it all. You have got to meet the demands, needs and expectations of a huge variety of people; the Department for Education, Ofsted, parents, community, MATs, staff and teaching unions. Unless you are adept at building teams and communicating with people, you will fall foul of all of those.

He credits The Brooke Weston Trust and his colleagues for their professional advice and support: ‘The Trust is very good at making sure that head teachers support one another and I couldn’t have survived the past four and a half years without having the Trust supporting me, particularly as we had so many difficult things that we had to do. When teachers or students join us they are now coming into a positive environment with all the foundations in place. We are not where we want to be yet, and there will be further improvements but they will happen. Having taken Kettering Science Academy to where I wanted it to be, it is now fair to pass it on. Now is the time for someone to come in with new ideas and energy and take Kettering Science Academy further.’